We were really sad when Thong phoned us only a few days after we arrived to inform us his mother had just passed away.  That day she had been taken from the hospital back to her home to die surrounded by the love of her family and she got her wish only a few short hours later.

The next day the funeral began.  We were quite unprepared in terms of what we should expect from a Lao funeral, and we were soon to find out that it is a 3 day event with specific things assigned to happen on each day.  On the first two days pork is the only meat consumed, along with veges and rice, and on the third day buffalo is also eaten, usually a raw and a cooked option of buffalo is available. 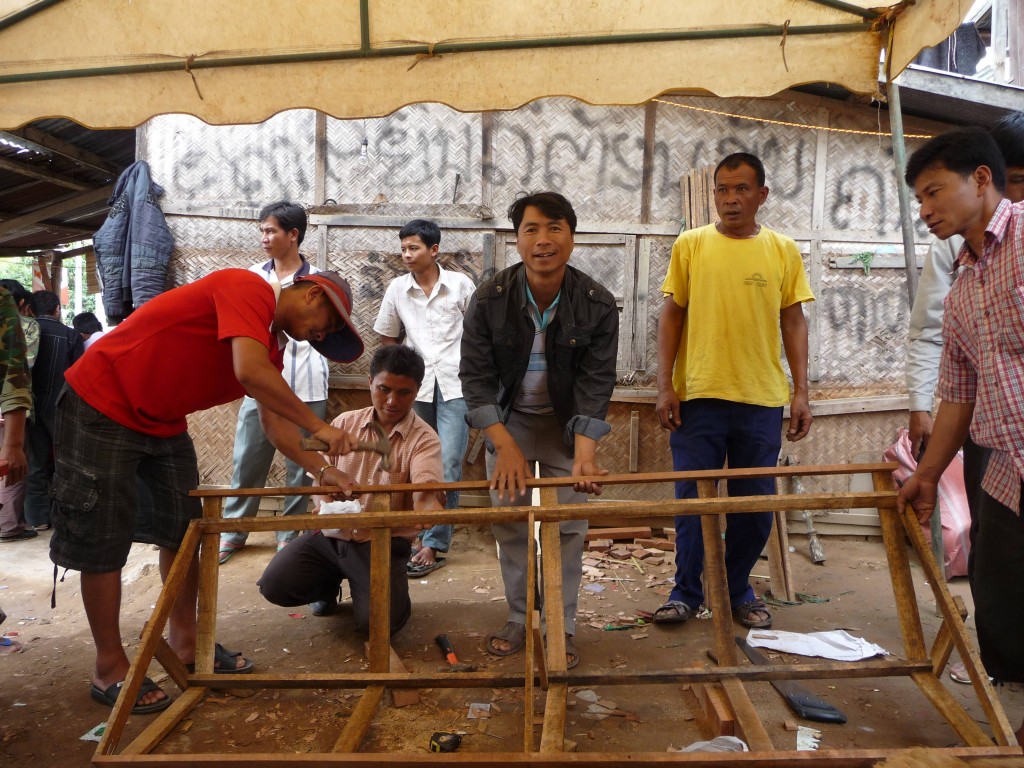 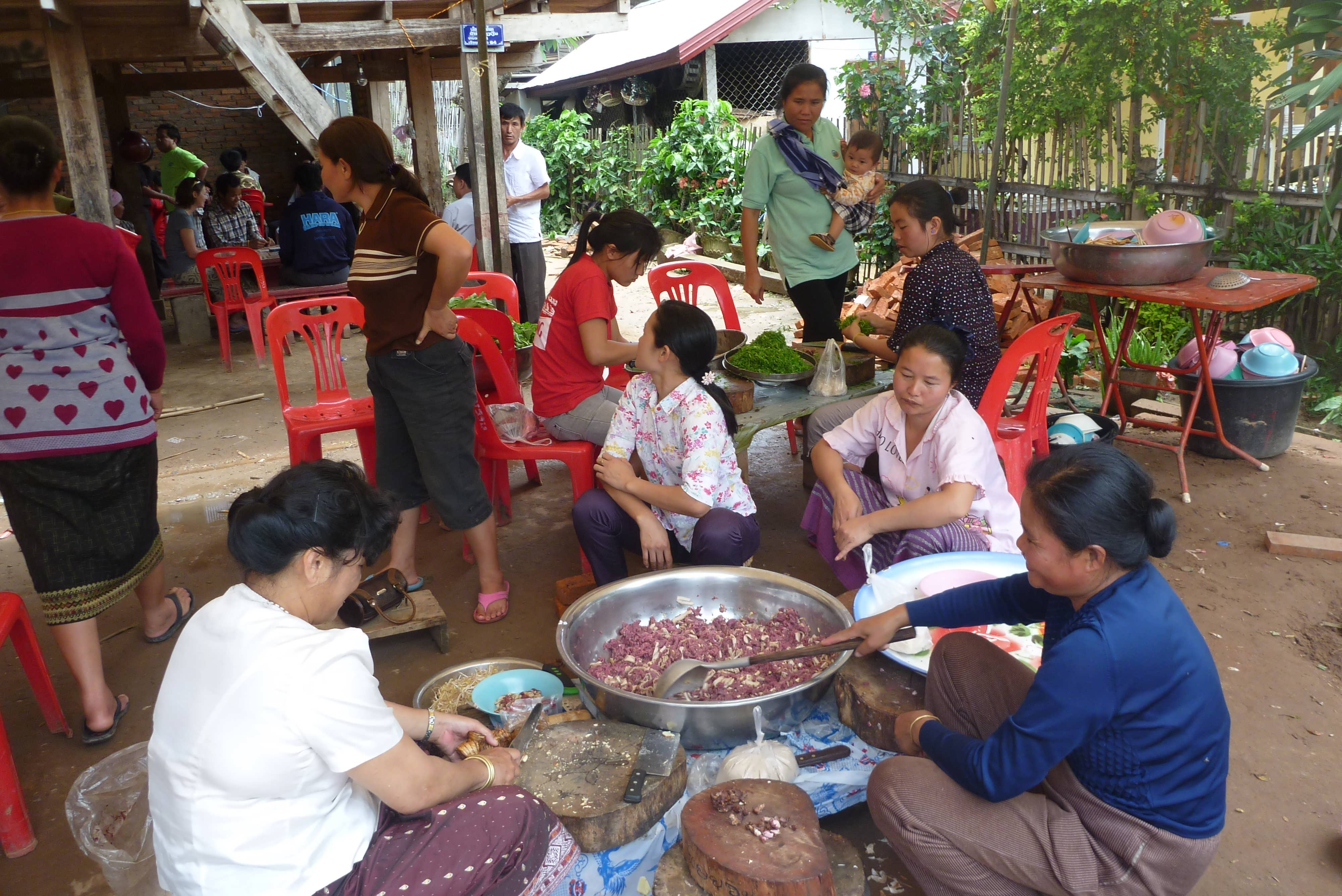 The first day the family build and decorate a coffin for their loved one and the body is placed inside.  This is followed by intense wailing by many who visit the coffin (mainly the women), each visit begins with throwing rice on the coffin and then lighting incense, and then a massive and loud outpouring of grief.  Then each visitor returns to outside, where the women sit in groups talking and some of them cooking or drinking Lao Lao, and the men either play cards, usually gambling while drinking Lao Lao (rice whisky) or build other necessary items for the funeral such as a roof for the coffin.

A group of monks then arrive and spend about an hour blessing the deceased and their family, chanting and basically wishing the spirit a good journey into the other realm.

Then the coffin is moved outside the house and put in a truck and taken to the cemetery and put in front of the platform for burning. 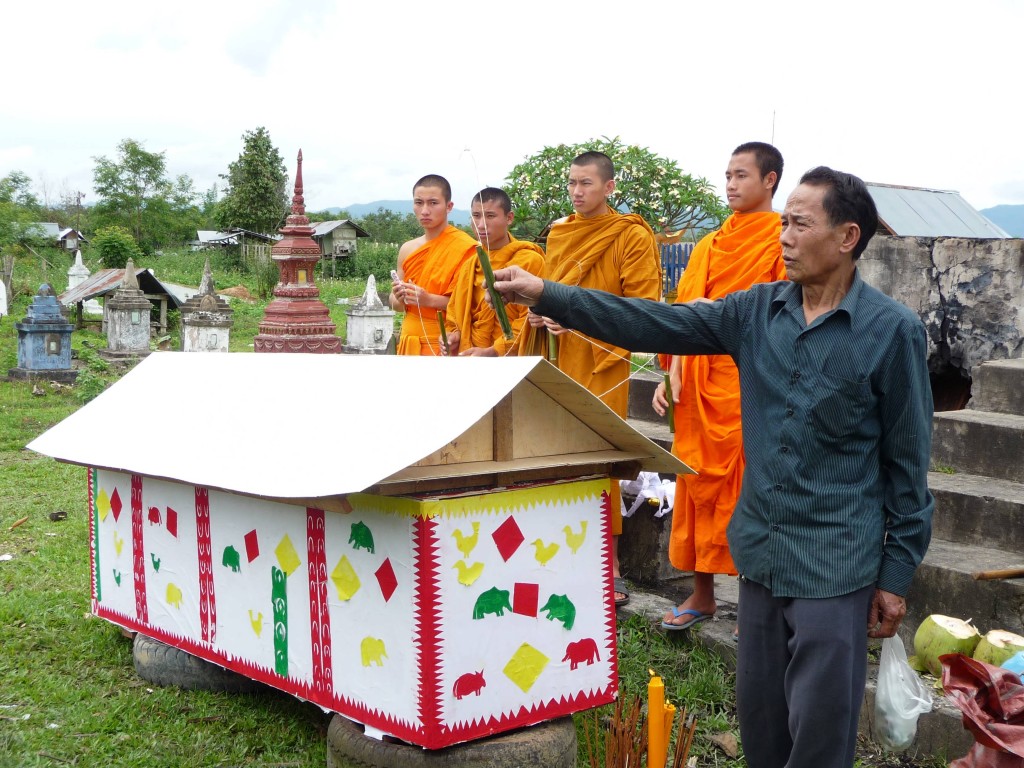 The monks then perform another blessing and the coffin is moved to on top of the platform.  All of the guests light more incense and a small candle, then walk up the stairs and throw the lit incense and candle into the coffin (which has just been soaked in petrol!) to start the fire. 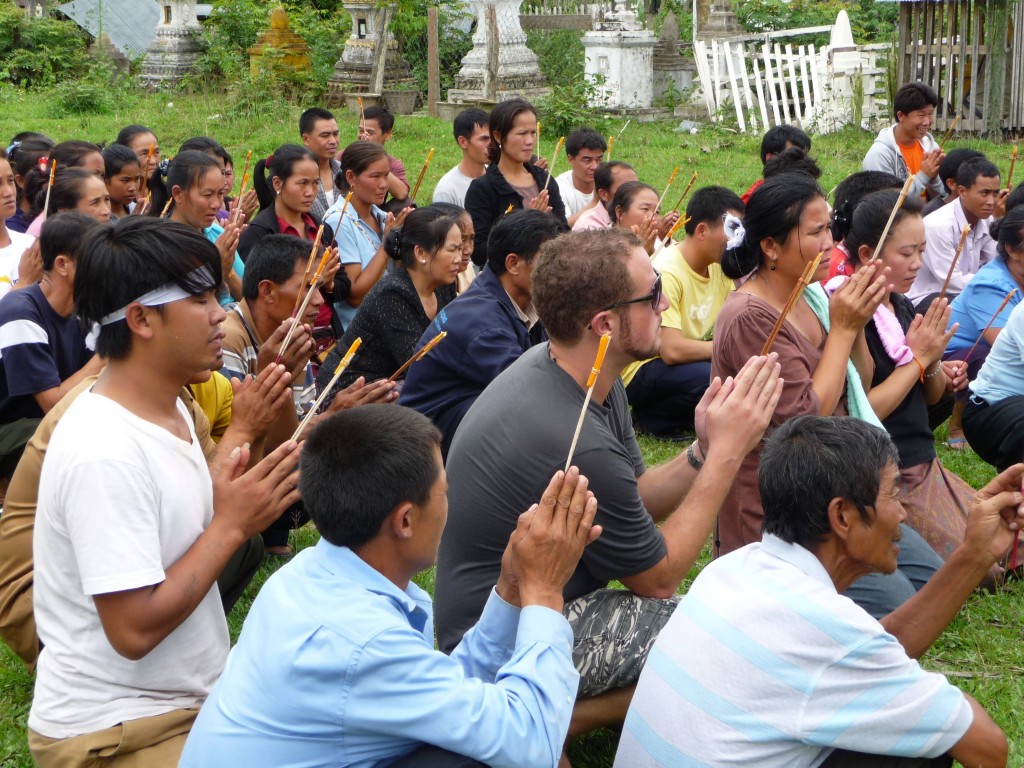 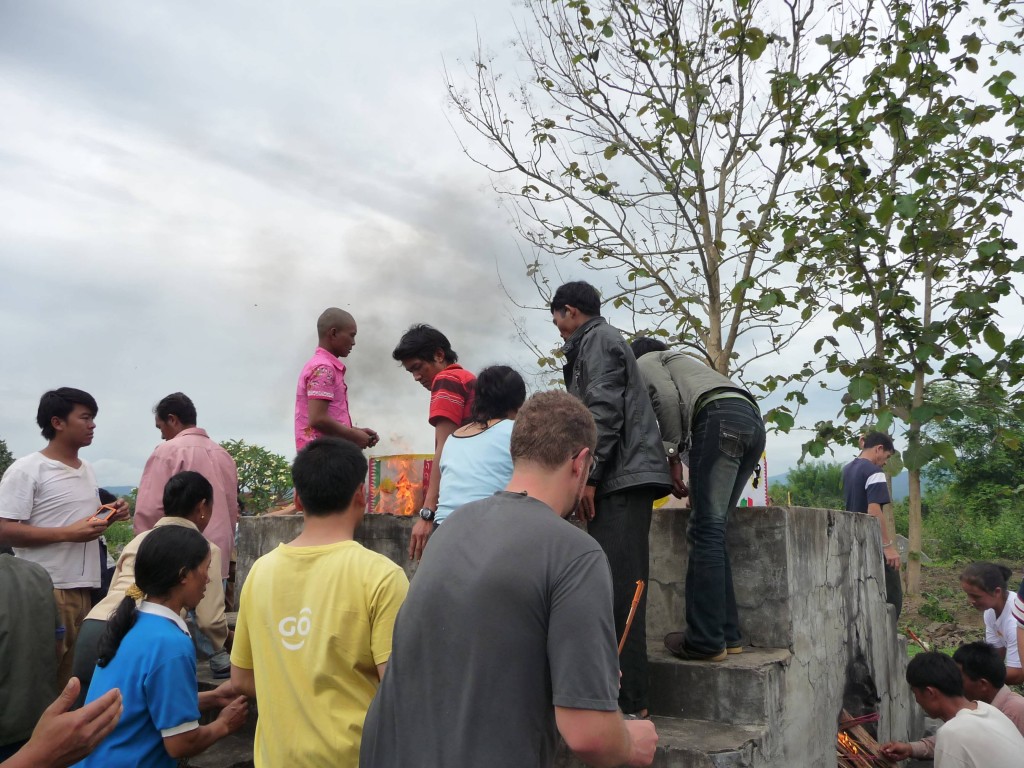 All of the guests sit and watch the coffin burn, and then return to the home for more food and Lao Lao.  The next morning, they return to the cemetery and collect the bones from the fire pit and bury the bones underneath a stupa (which is essentially the same as a gravestone).

More eating and drinking takes place back at the house, and the men build a little 1.5m x 2m spirit house which the women decorate with coloured paper and money, and inside they put blankets and cushions for the spirit to rest on.  They also make ‘trees’ of money and other items such as toothbrushes, hairbrushes, face cloths, dried fish, rice and other snacks for the spirit. 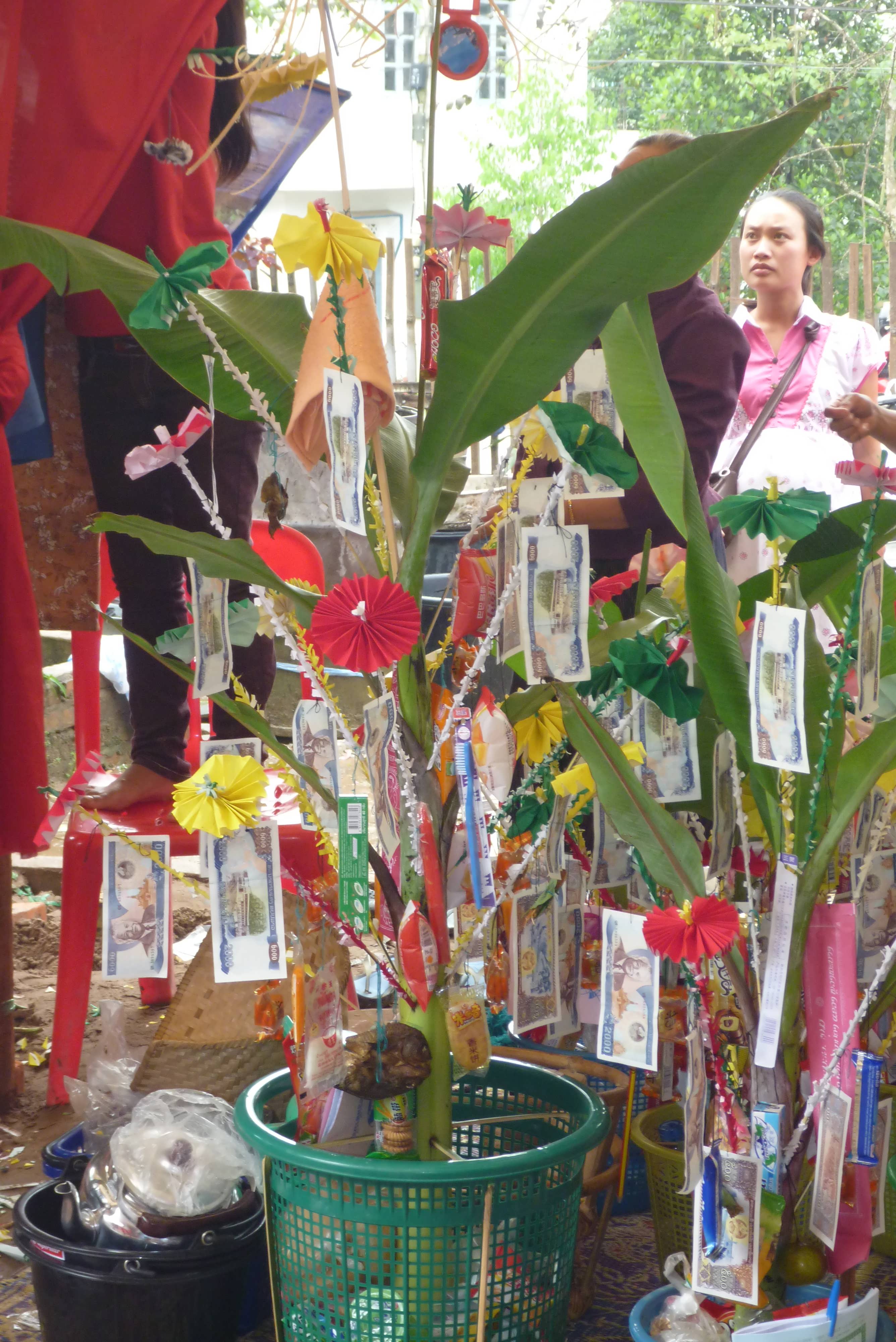 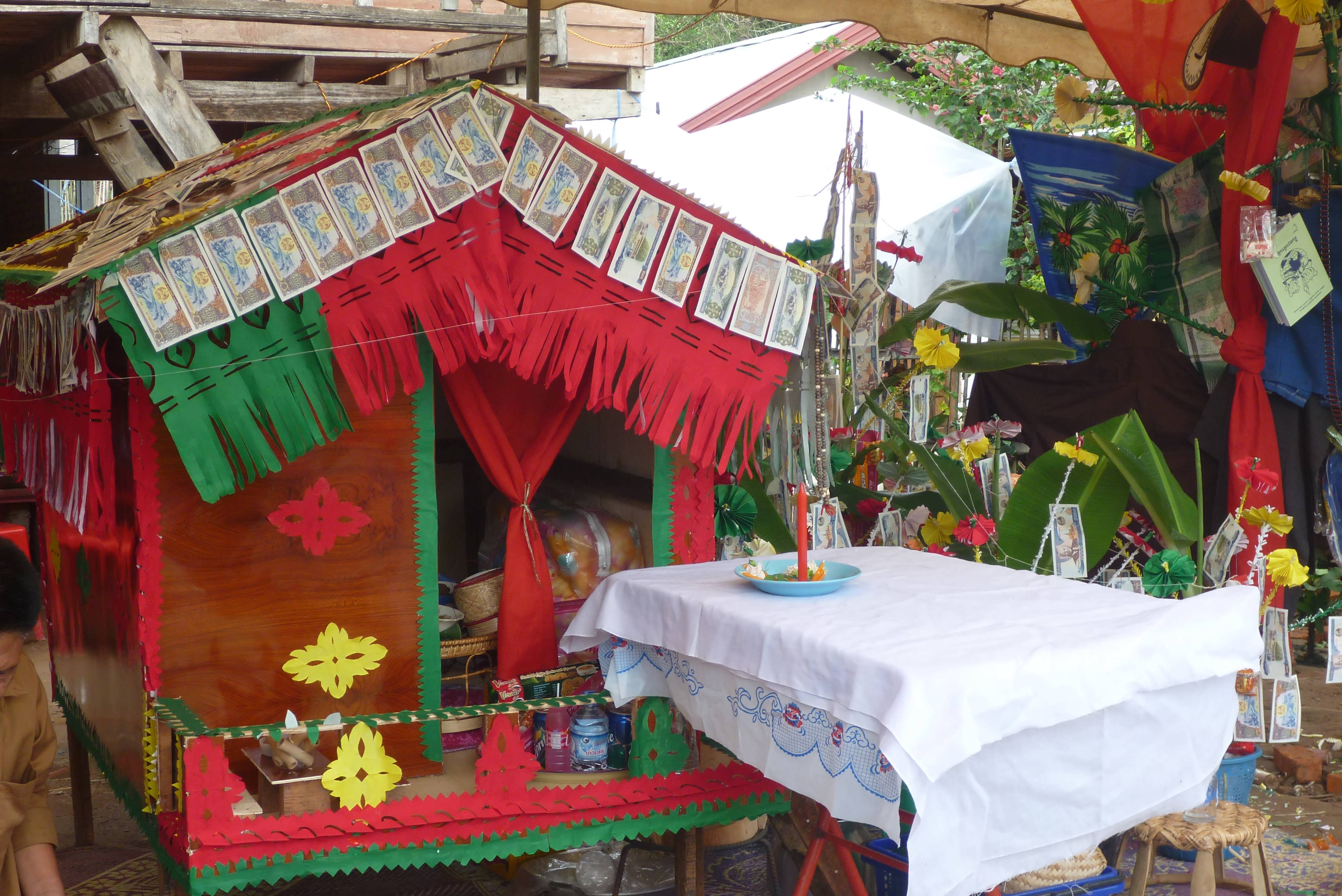 The afternoon is then spent at the temple getting even more blessings, and this is followed by even more eating and drinking. 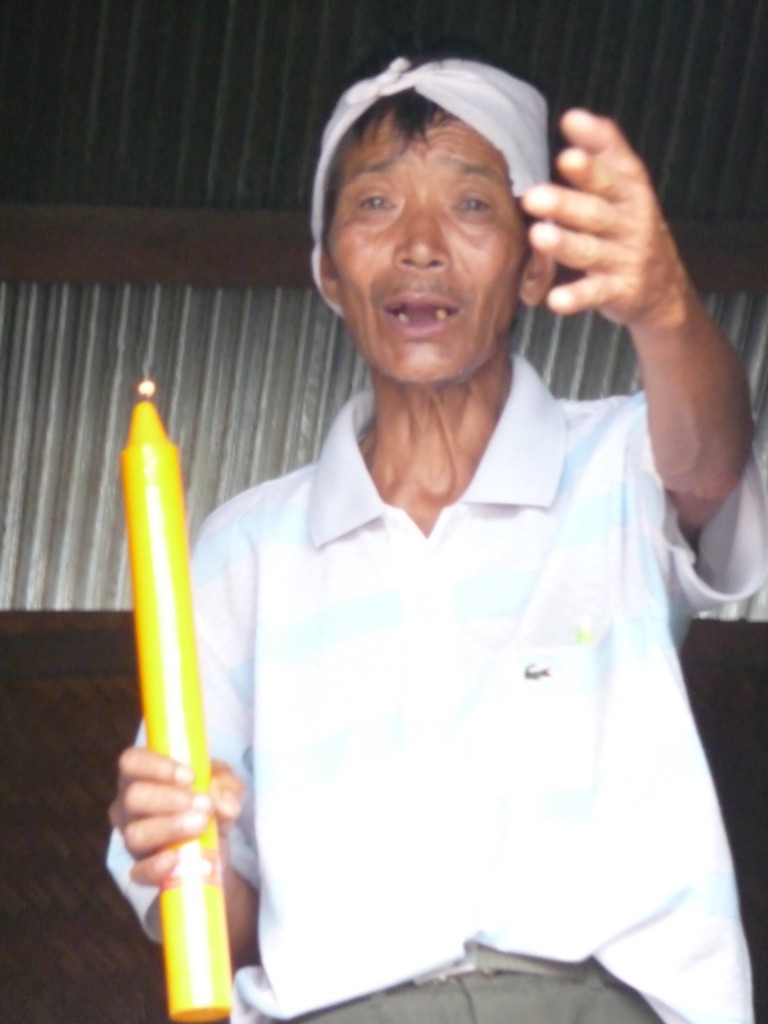 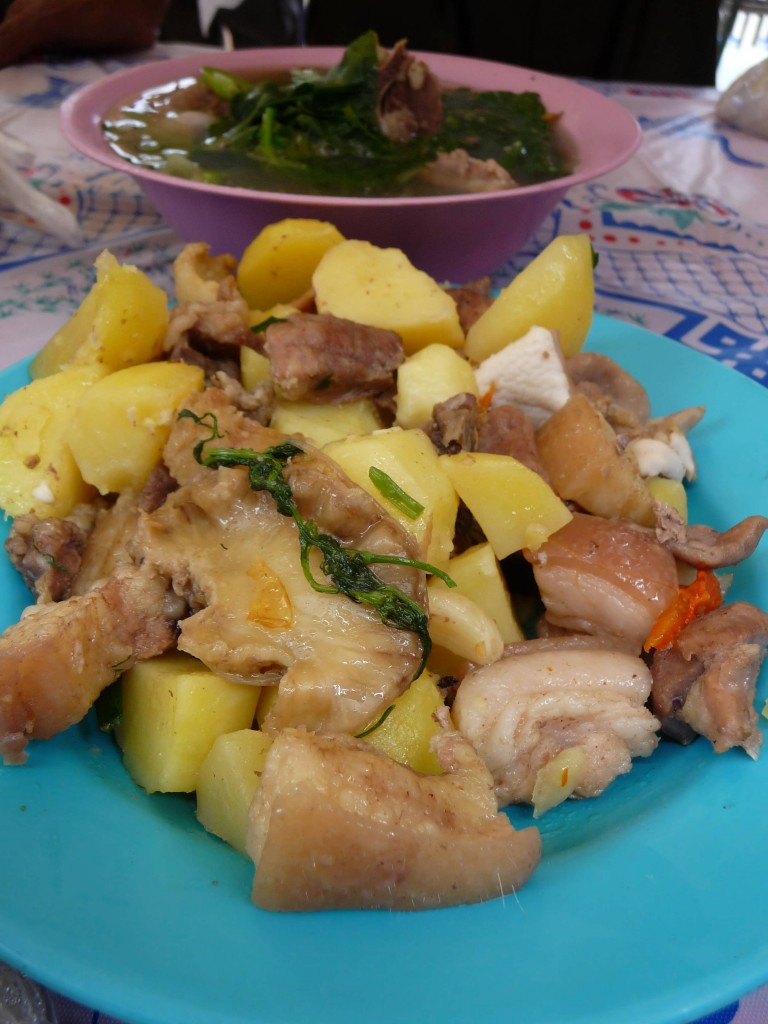 On the third and final day there is a string ceremony, to protect and bless the living, and then more eating and drinking. 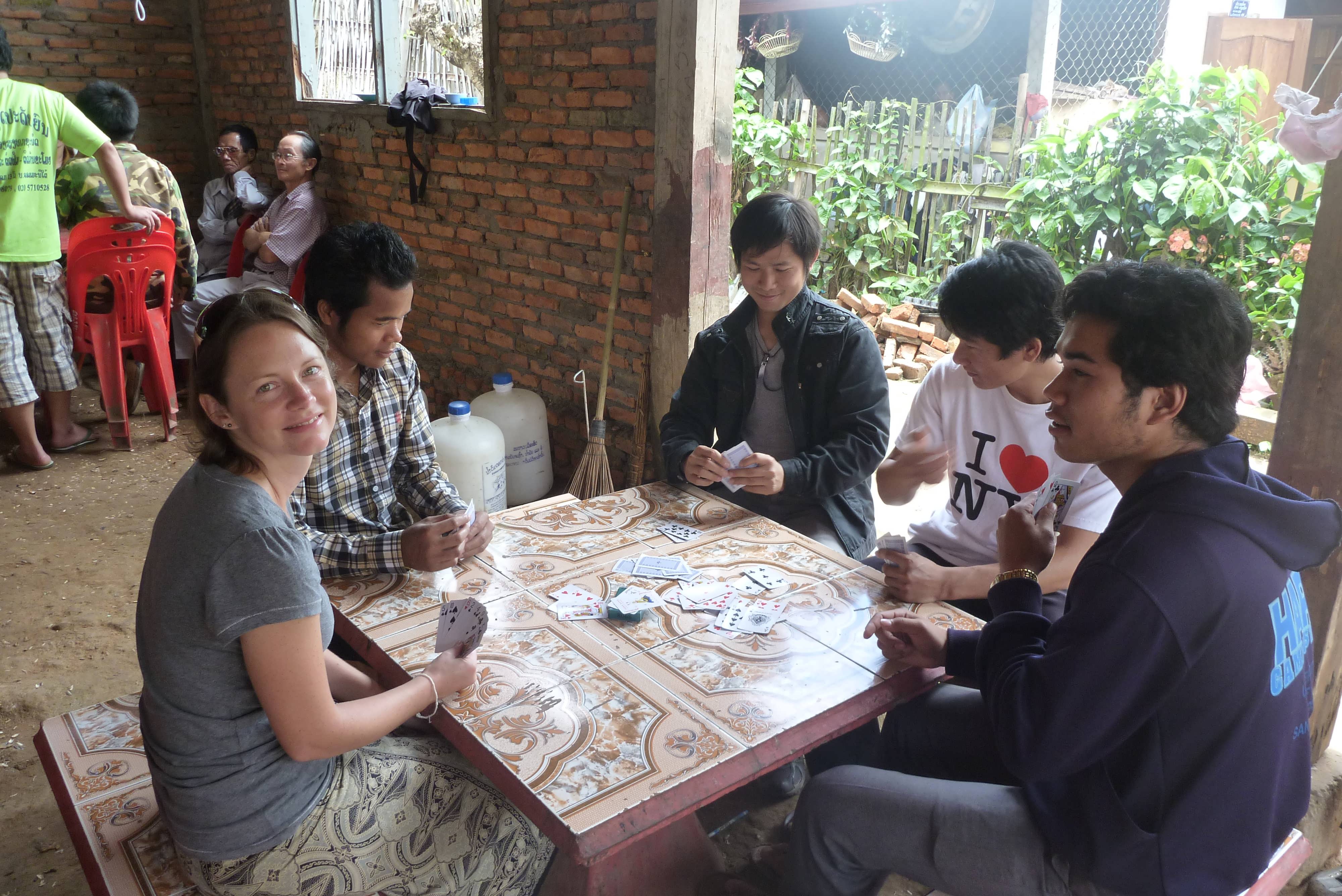 All in all it was a very interesting and utterly exhausting process.  We felt so sad for Thong’s family throughout the funeral and now.  The most intriguing thing for us was that they wanted as many photos as possible taken, people kept asking us to take more photos.  Why anyone would want such extensive documentation of a funeral of a family member is beyond us, we guess some things are still lost in translation.  In the beginning we felt quite culturally insensitive taking so many photos of a funeral but every time we’d stop, the family would ask us to take more so consequently we now have hundreds of photos of the funeral.  The family even borrowed our cameras and took photos inside the coffin while it was on fire… something we really had to draw the line at taking photos of ourselves!  This was such an unexpected and intense experience that hopefully won’t be repeated anytime soon.