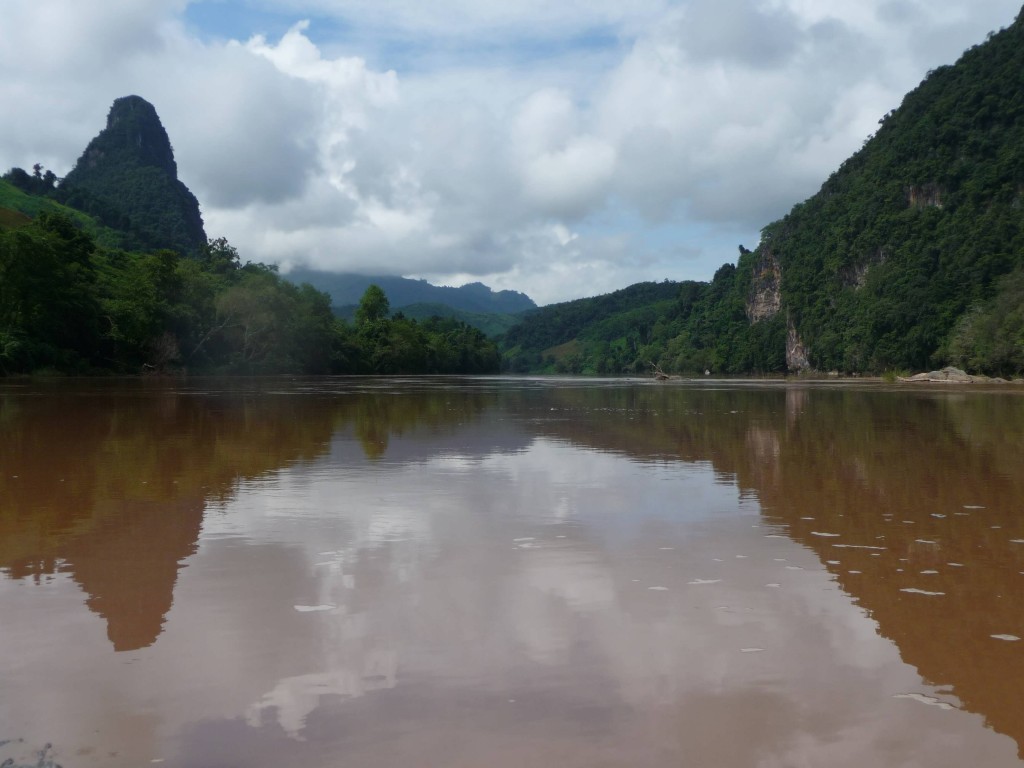 The day before we were going on the river trip down the Nam Ou and Mekong rivers, we all went to the port in Nong Khiaw to negotiate chartering a boat to Luang Prabang.  After speaking to several boat owners/drivers, we agreed with one of them that we would come back at 9.30am the next day and pay 1 million Kip for him to take all of us.  We weren’t 100% sure if the deal was done, as he was laughing a lot, but he said that 9.30am and 1 million was fine and we’d see him tomorrow morning.  So as agreed, the 6 of us (the original 5 plus another girl we met in town) turned up before 9.30 to get his boat, and soon found out that he didn’t have a boat, couldn’t take us for 1 million, and thought the whole thing was hilarious.  We thought it was pretty funny too, it seemed like a typical Lao way to start our day, and unphased we went to talk to some other boat drivers.  We managed to find someone who would take us for 1.2 million, and we also found 2 other Polish girls that wanted to come with us, so once we’d seen his boat, the 8 of us agreed to go with him. 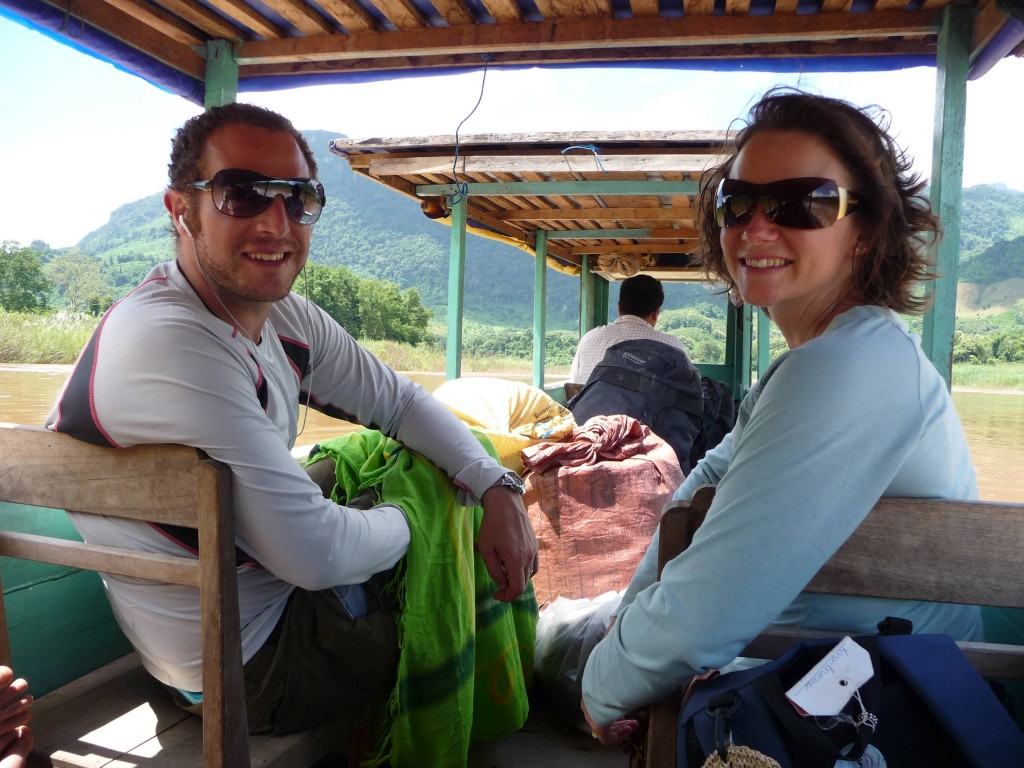 It turned out to be the most perfect day we could have hoped for – the weather started off a bit overcast with the sun just peeking through, and then the clouds cleared and we had beautiful blue sky for most of the way. 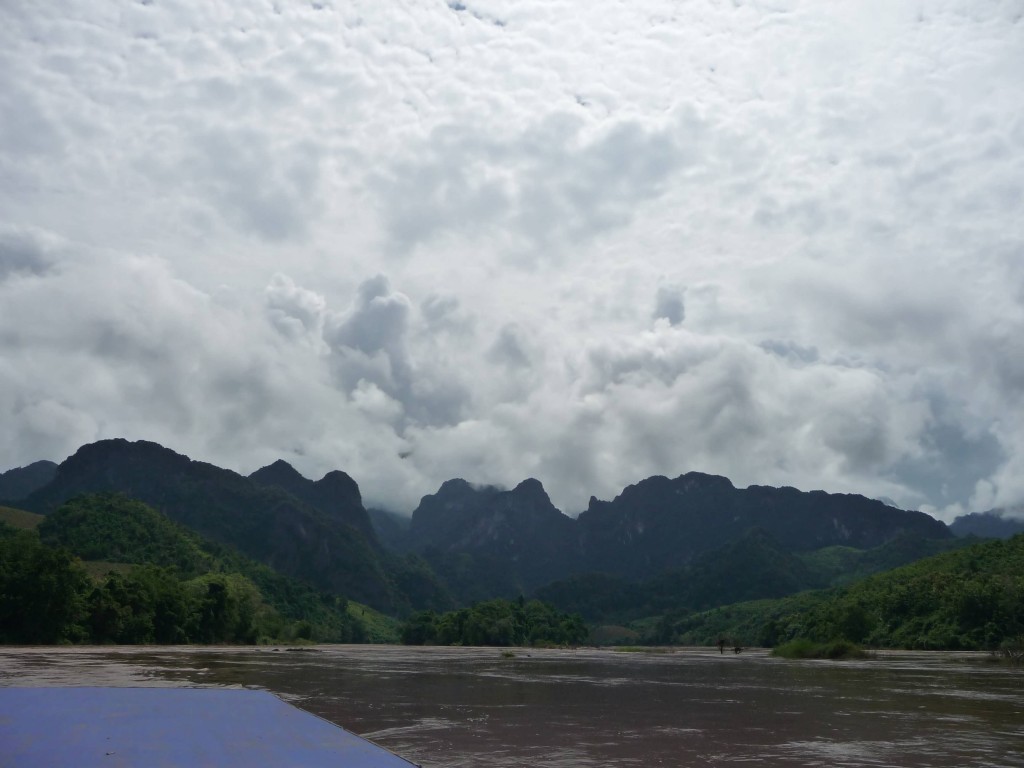 We spent the first 4 or 5 hours going down the Nam Ou river, seeing limestone carsts, local fishermen working, small villages and people going about river life.  Then we joined onto the mighty Mekong river and saw the Pak Ou caves, and eventually arrived at Luang Prabang.  We were both quite surprised at how beautiful the Mekong is – visions of muddy brown water was not exactly incorrect, but it is definitely a lot more picturesque in real life than in photos.  It was a fantastic day and as expected was well worth it to charter the boat rather than getting the bus.  Our photos are here. 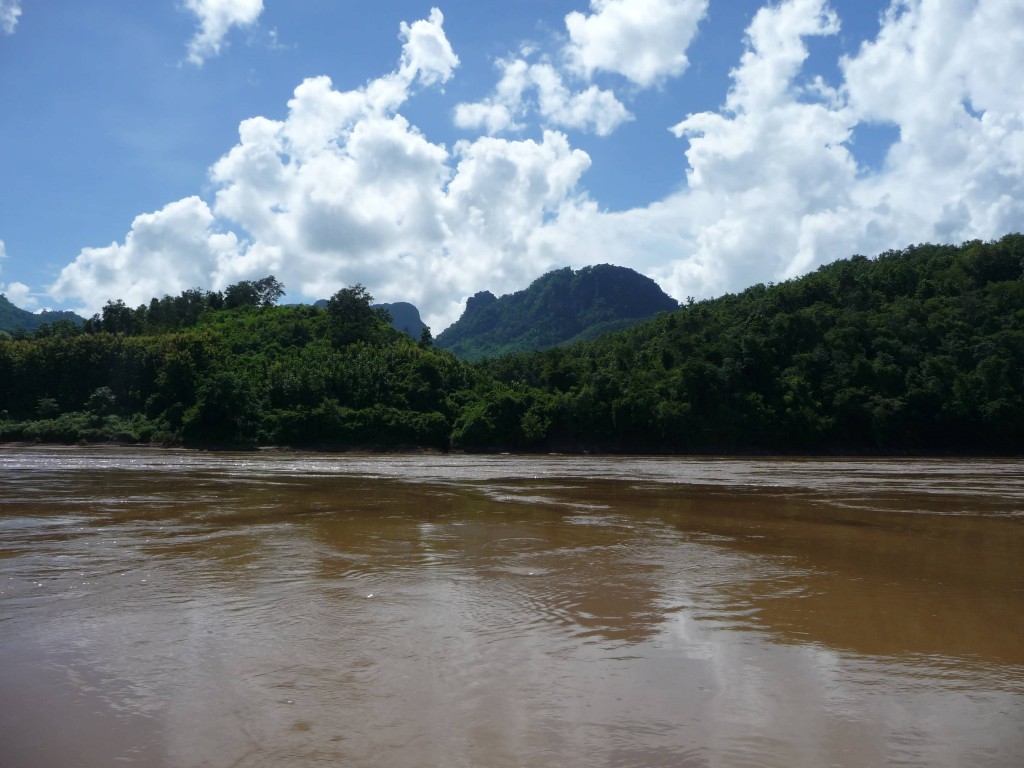 The night before we left Luang Namtha we mentally prepared ourselves for what we had been told was one of the worst roads in Laos.  In the morning we boarded the “VIP” bus for the 6 hour journey and for the first half hour we were pleasantly surprised by how good the road was.  Pretty much after that, the following 5 1/2 hours were spent bumping along, sometimes it was hard to believe that we were even on a road, let alone the single road to get to Luang Prabang – the only other way to get there is by boat.  We made the best of it though, and decided we were in massively vibrating massage chairs, and had quite a lot of fun.  The locals were kindly spewing into plastic bags on the bus (Karen was glad for her motion sickness tablets!) and there was a real live chicken on the bus at one point.  We got dropped at the bus station and found that our packs were absolutely covered in dust, and then we had to catch a tuk tuk for about half an hour to the town of Nong Khiaw. 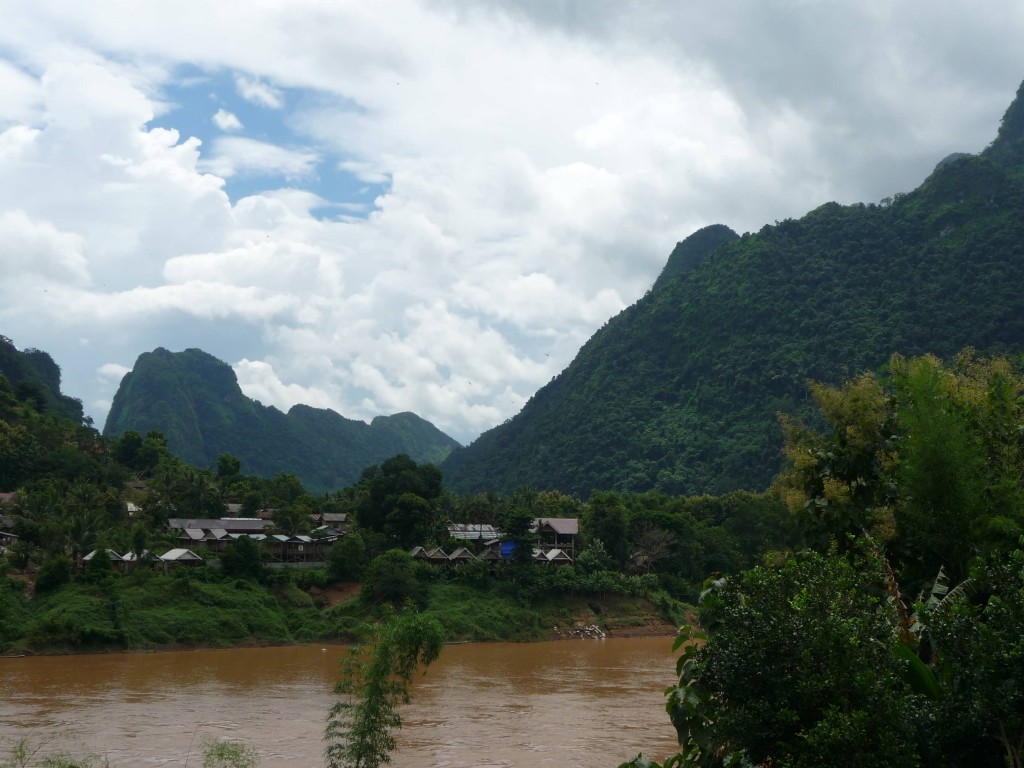 Once we arrived, Emma came to greet us and Tricia (who ended up getting the same bus as us instead of leaving the day before) and we quickly realised that the journey was totally worth it to stay in this beautiful town.  We decided that since we’d endured the bus we’d stay in the flashest place in town, and from the moment we checked in we knew we wouldn’t regret the extra dollars spent!  It was the perfect place to spend the day – we basically alternated between sitting on the balcony looking at the limestone carst and river view, and laying on our asian triangle-pillow day beds looking at the view.  A pretty awesome day!  It would have been worth it for the bacony alone – what we didn’t realise when we checked in though, was that we also got the most awesome shower that we’ve had for 3 months (Fairmont Singapore was the last good shower) and comfortable chairs.  Comfortable chairs – now this is something you can’t even imagine – the joy of sitting somewhere comfy – unless you’ve travelled Asia for a while (or probably any other 3rd world continent).  So yes, staying there was a definite highlight of Nong Khiaw. 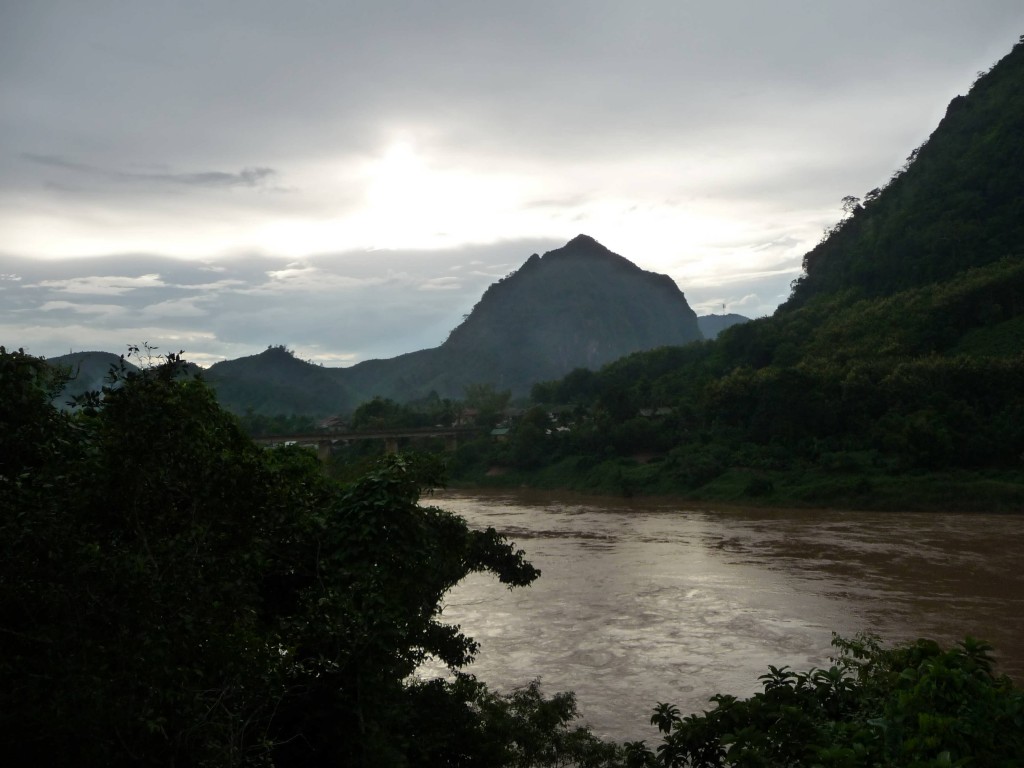 The 5 of us went to dinner together overlooking the river and prepared with excitement this time, for the river journey the next day to Luang Prabang.  Athough it’s much cheaper to get the bus, we’d been told it was the most beautiful river journey in all of Laos so all decided to charter a boat to make the journey.  Our photos are here. 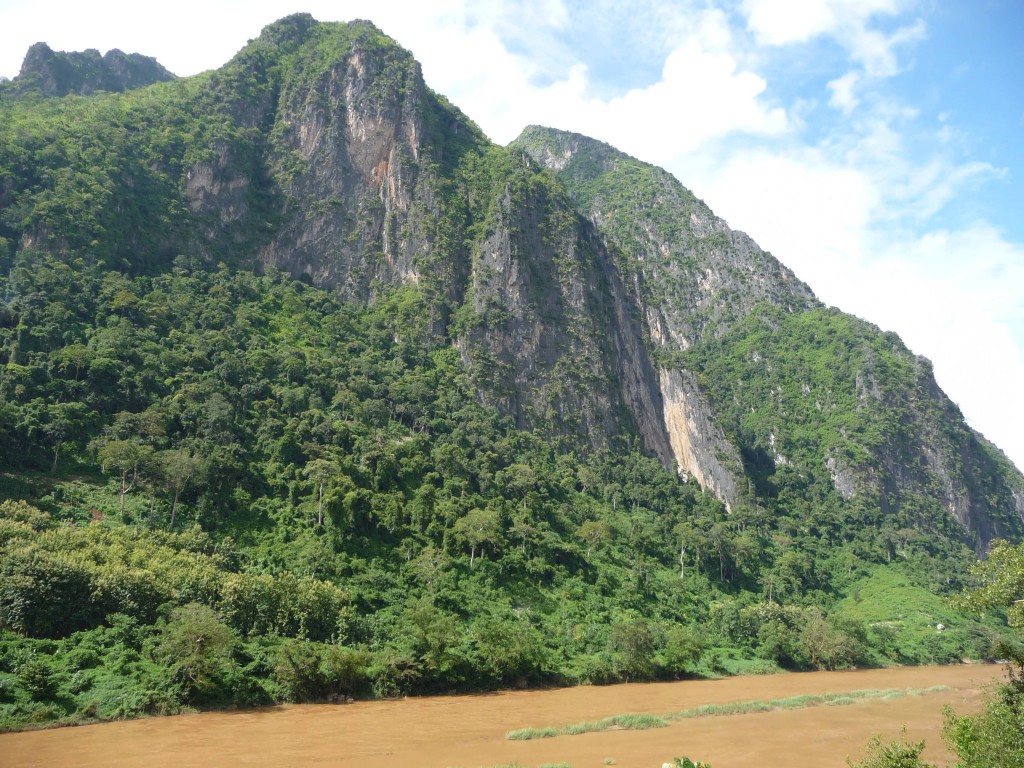