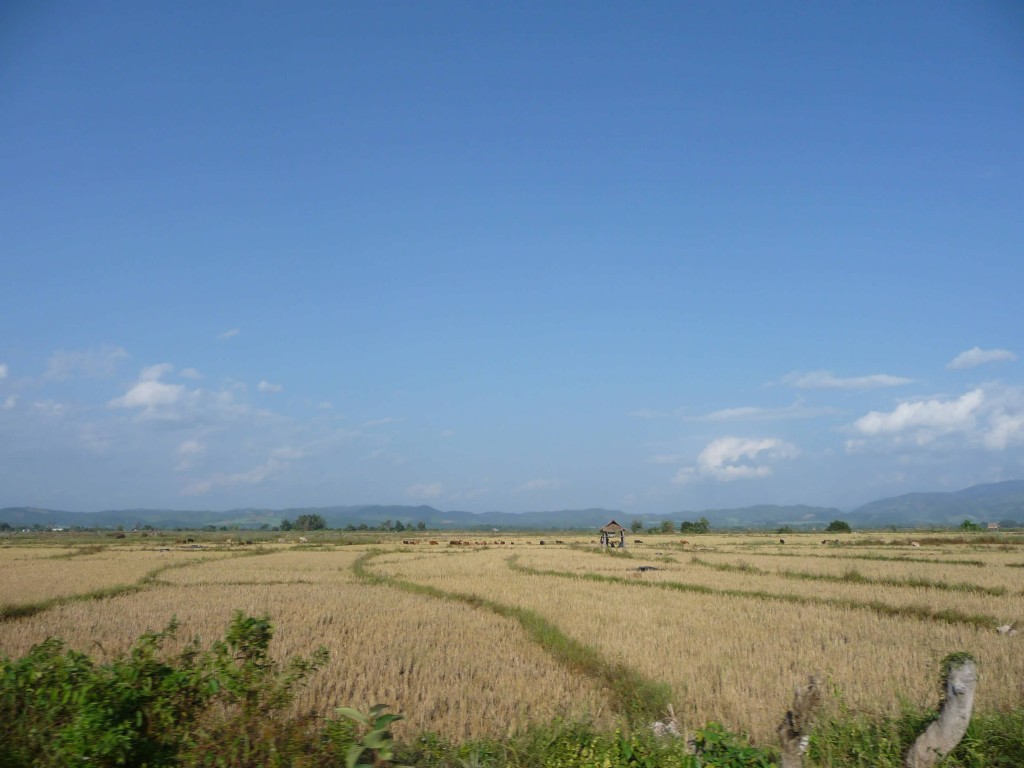 We decided to see Muang Sing the right way this time, and hired a  motorbike for a few days for our 5th Wedding Anniversary both to ride there and also to explore the area on.  The ride there is just breathtaking, and we were able to appreciate it a lot more from the motorbike than we did from the van on the way there last time.  We made lots of stops to see the beautiful forests and when we did arrive in Muang Sing rocked up to our favourite guesthouse and settled in. 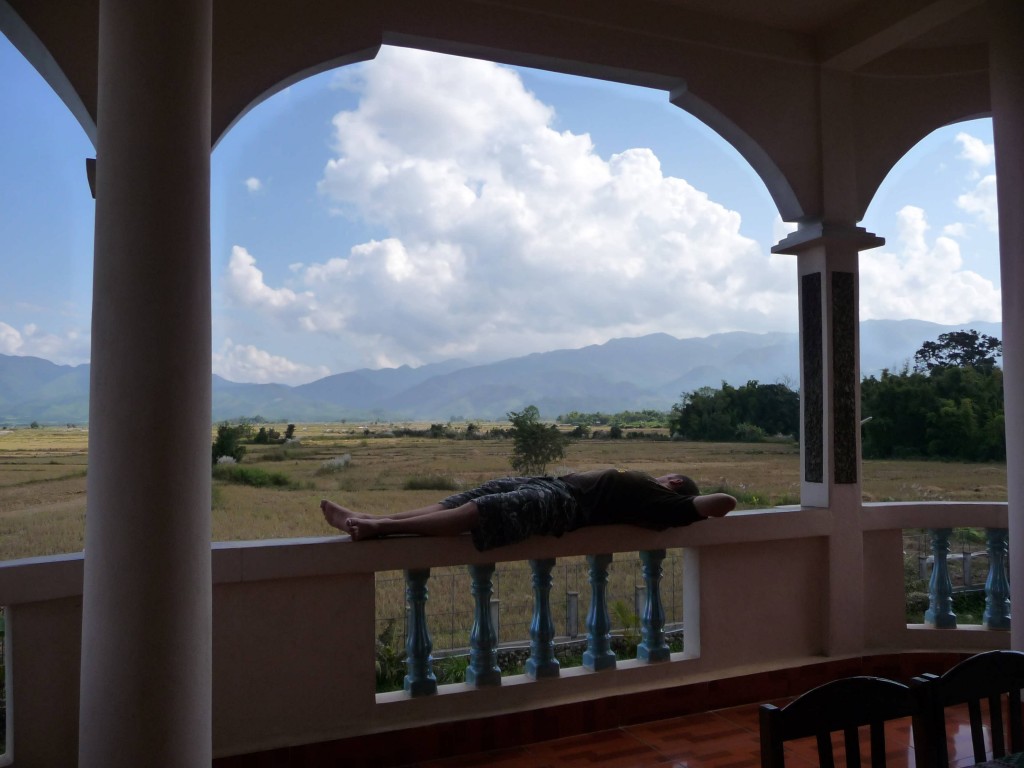 The first thing we wanted to do was ride to the Chinese border again, so we set out on the bike only to discover our first flat tyre a few minutes down the road.  We got this repaired at the nearest shop in town, and paid the princely sum of 5,000 Kip (about 55 cents) and left on our second attempt to get to the border.  7kms from town and 3kms from the border, we realised once again that our tyre was flat!  Oh dear, this meant a 7km walk back to town pushing the bike.  Not to worry, we were on the most beautiful road in Asia and the sun was setting so we were very lucky to be there.  After perhaps about 3kms, a Lao guy motioned for us to go to the next house on the left, so we did, and it turned out that guy could fix our tyre.  After meticulously repairing it very skillfully with a grinder to get rid of the previous patch, blowing on the glue to make sure it was ready and patching it up for us, he graciously said he didn’t want any money, it was his gift for us.  We gave him 20,000 (about $2.10) because we were so grateful to have met such a nice, skilled guy who fixed our bike on the side of the road and saved us walking another 4kms back in the dark to town.  Fun times! 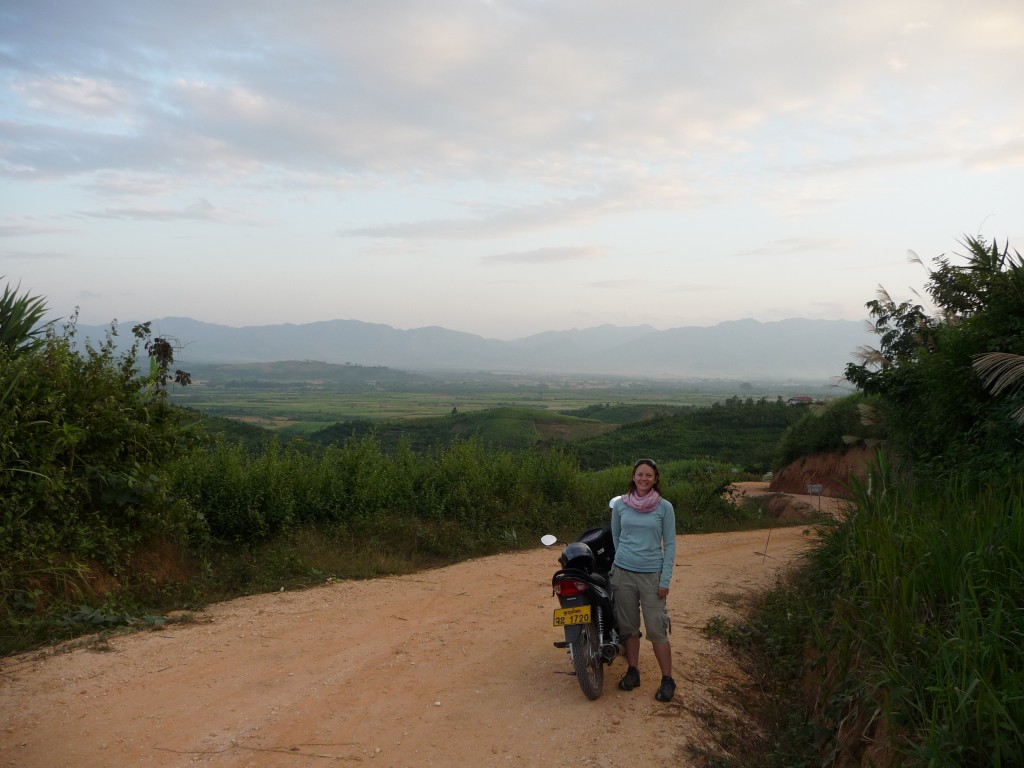 We ate at our favourite restaurant and then the next day spent the entire day biking around the outskirts of town.  We visited a few villages and rode up the mountains for amazing views of the rice fields and villages below.  It was such a cool day and we both couldn’t stop grinning the whole day because we were just having such a good time. 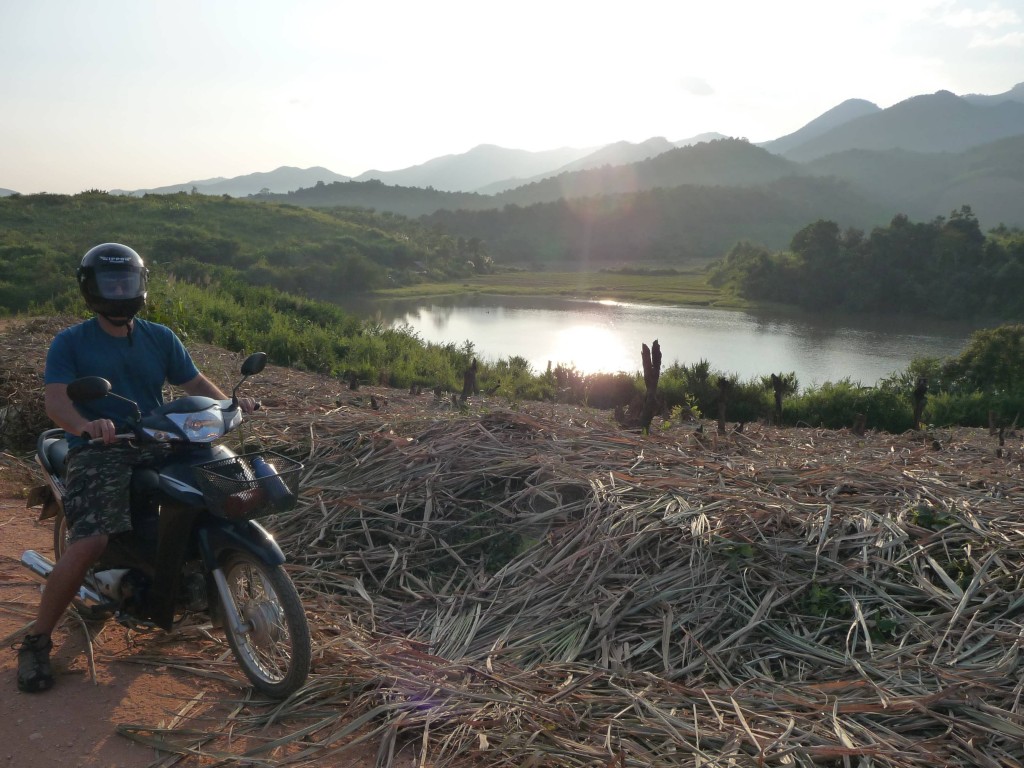 After deciding to stay another night and visit the festival the next day at the advice of all the locals, we wanted to go back to the Sechzuan restaurant we ate at last time but found it totally full so settled for the night market and lamented about how the noodle soups here don’t even come close to how awesome our noodle soup lady in Luang Namtha makes them.

We loved visiting the morning market here and got to have the best freshly steamed peanuts ever – something which is quite common here is peanuts steamed still in their shells and they are to die for. 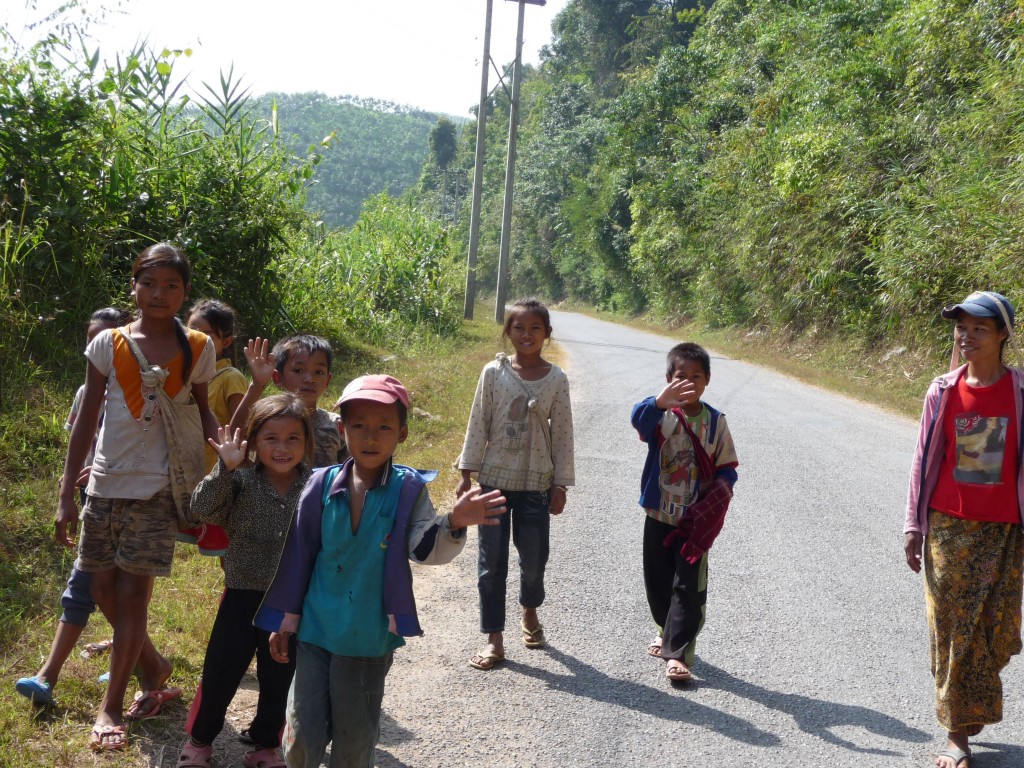 We visited the festival on our way back to Luang Namtha and it was OK – sort of just a massive morning market with heaps more people and much louder music.  It wasn’t really our thing so after the 3km walk to the top of the mountain in the mud and the full sun, we had a quick look around and decided it was more fun riding on the bike through the mountains so left to do just that.  Our photos are here. 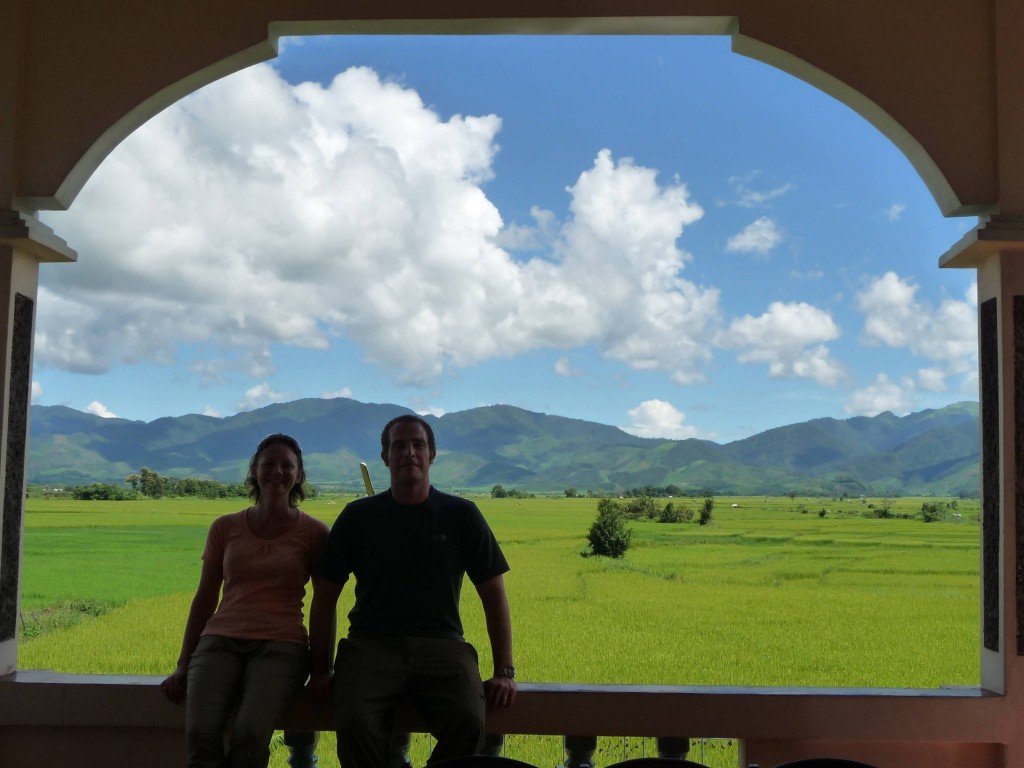 Next time you go to Asia, go to Muang Sing.  No ifs.  No maybes.  Just go.  On Friday morning after we had finished work we took a van up to Muang Sing, near the Chinese border.  Since we were only going for a night or two, we decided to keep renting our room in Luang Namtha and keep most of our stuff here.  (We had just moved into the best room in our guesthouse and didn’t want to lose it.)  After an incredibly scenic drive (bounce) through National Park, we arrived at Muang Sing and checked into some garden bungalows that Eric and Emma had found the day before.   We soon discovered we were the only tourists in town, plus one Dutch girl.  We were quite a novelty for the locals it seemed.  We then all went to lunch, at a beautiful little shack in the rice paddies with a stunning view.  After lunch that included the best red sticky rice we’ve had so far, we were wandering back to our bungalows when we spotted a huge mansion and wondered how expensive it would be to stay there, with it’s expansive view of  the mountains and rice fields.  We went in to have a look and immediately fell so in love with the place that we decided to move out of the bungalows and into the mansion.  We convinced Tricia to move with us, and Eric and Emma and Miriam and Trina decided to stay at the bungalows since we had all already paid for the night ahead.  So there we were in Muang Sing, renting the place with the most amazing view, plus renting the garden bungalow, plus renting our room in Luang Namtha, and we were totally stoked!!!  We managed to explain to the bungalow people that there was nothing wrong with their rooms, we just decided to move with the help of an awesome young guy Kun-Har who spent the past 3 years at Uni studying English specifically so that he could go back and help his town as an interpreter and information guide.  What an awesome dude!  After spending a couple of hours staring at the ever changing view, we (us and Tricia) decided to hire bicycles and ride to the Chinese border.  Eric and Emma joined us on their scooter so we all kind of rode together.  The ride there was so breathtaking and would absolutely be the highlight of our entire trip so far. 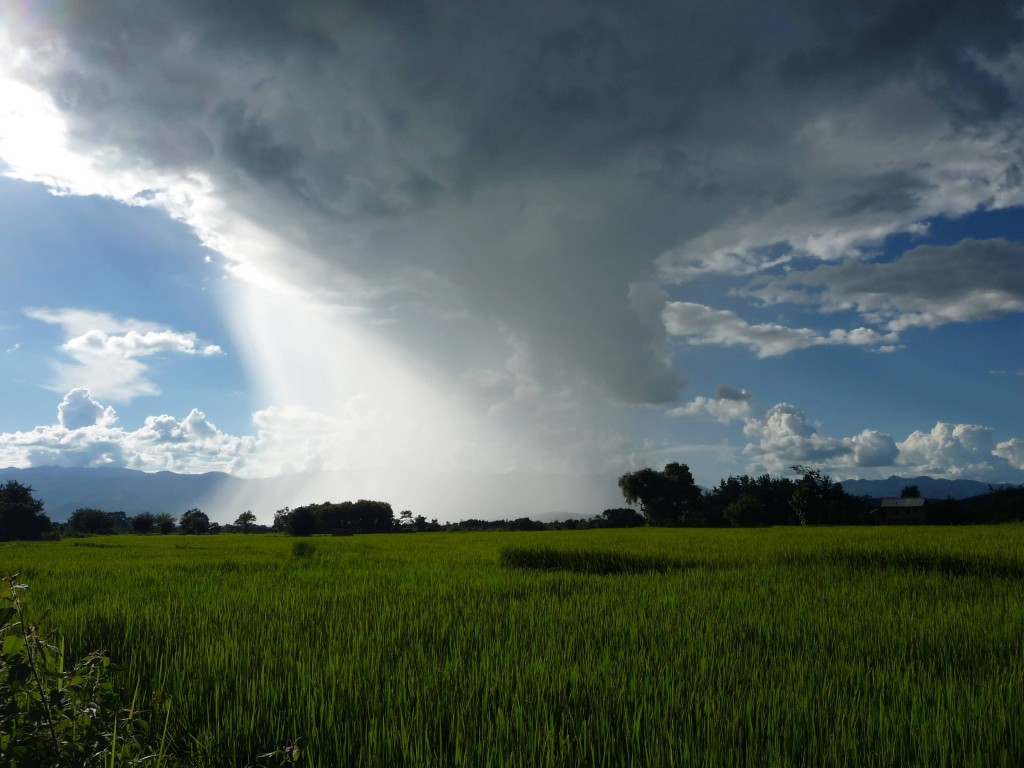 We all managed to sneakily stand on the Chinese side of the border so now we have technically all been to China :-) .  Eric and Emma managed to ride 4kms into China on their scooter before a Chinese official turned them back!  They were so stoked.  We all went back to the mansion and watched the sunset.  That night we all went to the night market which was so tiny compared to the one in Luang Namtha and had Kauw Soy – handmade rice noodles in a local soup where you put all your own leafy greens and herbs and chilli in the soup when it is served straight from the cauldron of boiling water so they still get cooked and are very fresh. 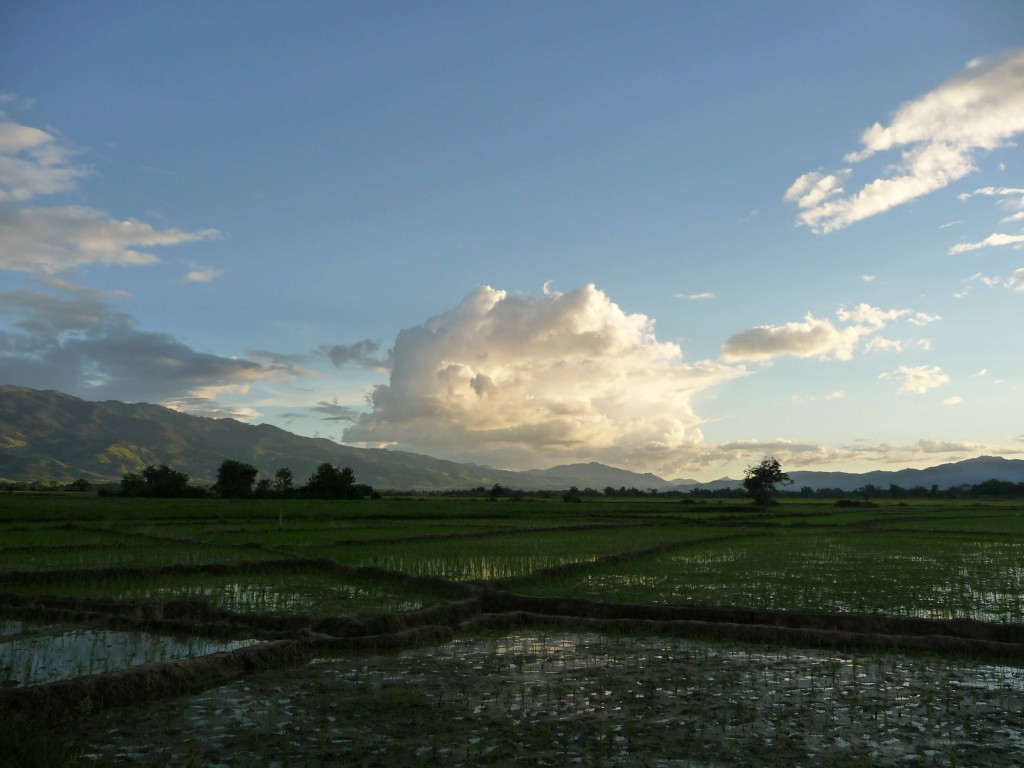 The next morning we got up to see the awesome sunrise, and Eric and Emma also moved into our mansion after their night in the bungalows because the mansion was so awesome and we had the entire place to ourselves. Then we all went to the morning markets for breakfast. There was some amazing foods there and the entire market atmosphere was amazing with the majority of people there dressed in their traditional tribal outfits just going about their daily lives.  Before visiting here we have always held a vague idea that although there are definitely people who do still dress this way, in Thailand especially it seems that most of the tribal dress is just for show for the tourists.  To see all the women here dressed beatifully in their local clothes and so many different tribes milling about buying and selling fruit and vegetables and river fish and many other animals (Bamboo rat, pheasant, freshly killed chicken with all the feathers still on, pig, many intestines and offal, silkworms and rhinocerous beetles just to name a few!) was so cool. 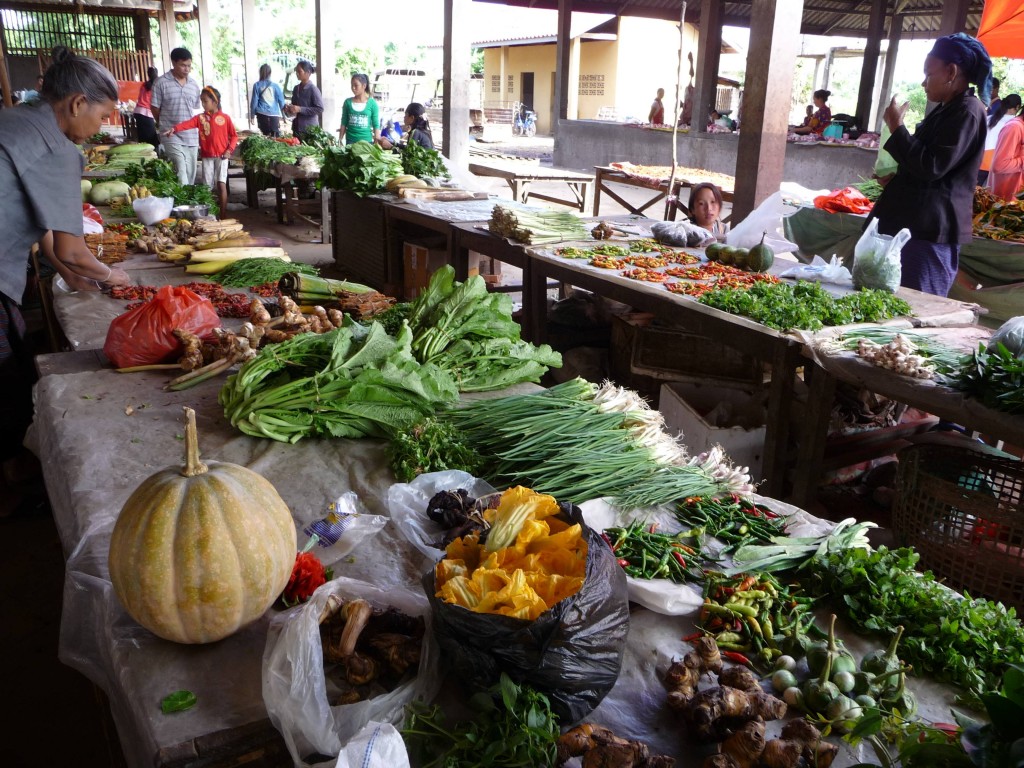 After breakfast the two of us decided to have a lazy day looking at the view, Eric, Emma, Miriam and Trina went on a trek together into the National Park, and Tricia went to a local village with another traveller we met from Germany.  It seems Tricia got to have the most exciting day of all – not quite in the way she hoped though, while they were in the village they had been invited to sit on one if the lady’s balcony and while there they heard 5 gunshots and then all the villagers started screaming and running.  They didn’t know what to do so just hightailed it on their bikes out of there as fast as they could and went to the police station.  This made us even more glad that we had a magical day with the view!  We decided to stay another night because we were enjoying ourselves so much, so had another group dinner at the night market and sampled some of Eric’s purchase of the day – locally made Lao Lao which is rice whisky.  There were two kinds and they were by far the most alcoholic substance we have ever tasted!  The smallest sip you can possibly take would make your entire mouth and throat on fire for about 10 minutes afterwards.  So we all sat drinking Lao Lao and watching the stars.  It was a memorable night and we felt so lucky to have met such cool people to be in Muang Sing with. (And to hopefully catch up with again in later travels). 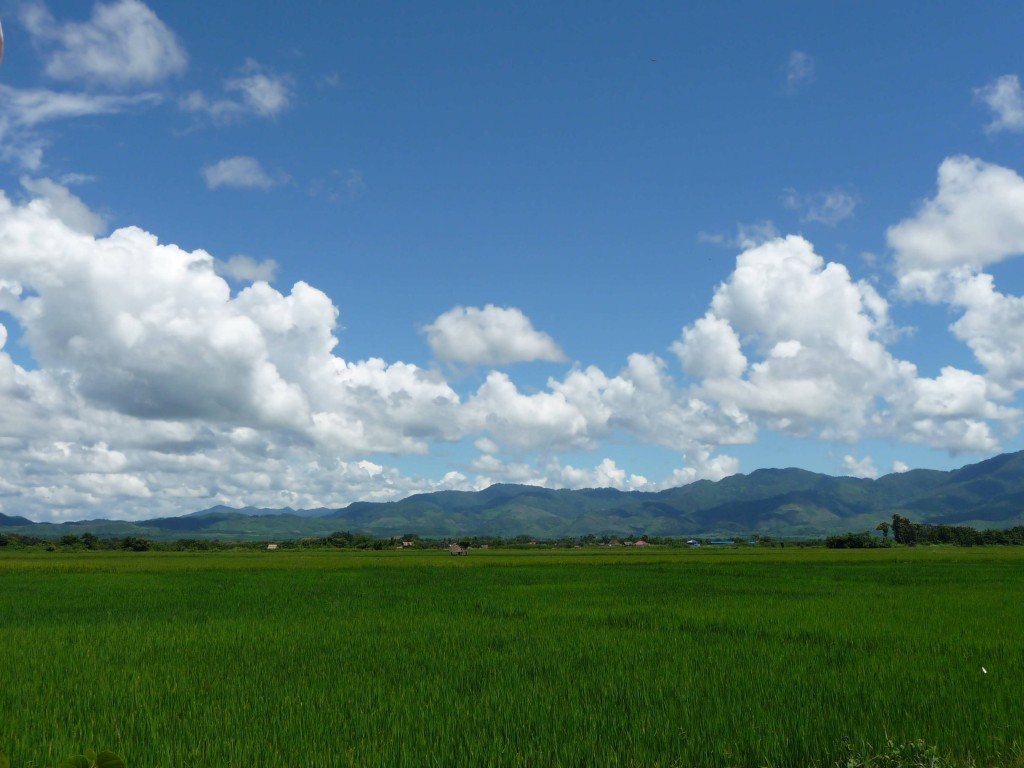 Our final morning we all had breakfast together at the morning market and then Tricia went off to do her day trek (a proper organised one this time with a guide!) and Eric, Emma and both of us chilled out for the morning and then had lunch at a Sichuan restaurant – we couldn’t leave the Chinese border without eating some authentic Chinese food!!  We then walked to the bus station and agreed to meet up in a few days when they arrive back in Luang Namtha.  It was such an awesome weekend that the two of us are seriously considering staying here yet another week, and going up to Muang Sing again next weekend as well.  (There is no internet in the town so we can’t stay during the week.)  Maybe.  We’ll see.  Our photos are here.