The last few days in Belgium have been great.  We started with Grand Place, and the Galleries St Hubert, which had many many chocolate shops.  We managed to sample almost all of them.  Dre was able to drink 13 different kinds of Belgian beer, he had no hope of trying them all in only 4 days!  We stayed right in the centre of the city, and were lucky enough to stay in 3 different rooms in the one hotel; we asked to move after the first night as they were painting and laying new carpet, then we asked to move after the second night as well, because the second room was a roadside room.  The 3rd one was good.  (Apart from the shower being a more like a water fountain and spraying water in all directions.)  Despite that it was still good, and they gave us a discount when we checked out so we did well.  Beside our hotel we were very lucky, as there were not only about 20 different restaurants (around 100 within 2 minutes walk), and beer places and chocolate shops, we also found 2 fresh food bars, which is more exciting than it sounds.  The one thing that is bad about travelling is the lack of anything that resembles healthy food.  Both of these places had around 30 different kinds of salads, fresh fruit, gluten free, dairy free, vegetarian goodness.  YUM.  On the following days we went exploring and saw all the main sights, as well as stumbling across a few other interesting things.  The cathedrals are really cool as they all have bells that you can hear when walking around.  We saw an impromptu puppet show (in French) and a live band also.  We found a massive park that doesn’t seem to be in any tourist books, which was nice and green.  We had read lots of stories about Brussels, saying that there is no green there, but we found lots of gardens and parks so didn’t really understand what they were on about.  We loved Ghent, where we went on a day trip yesterday.  Many Cathedrals, and the famous 13th Century painting ‘Adoration of the Mystic Lamb’ which was really interesting. Right now we’re on the train to Amsterdam so a new adventure is about to begin. 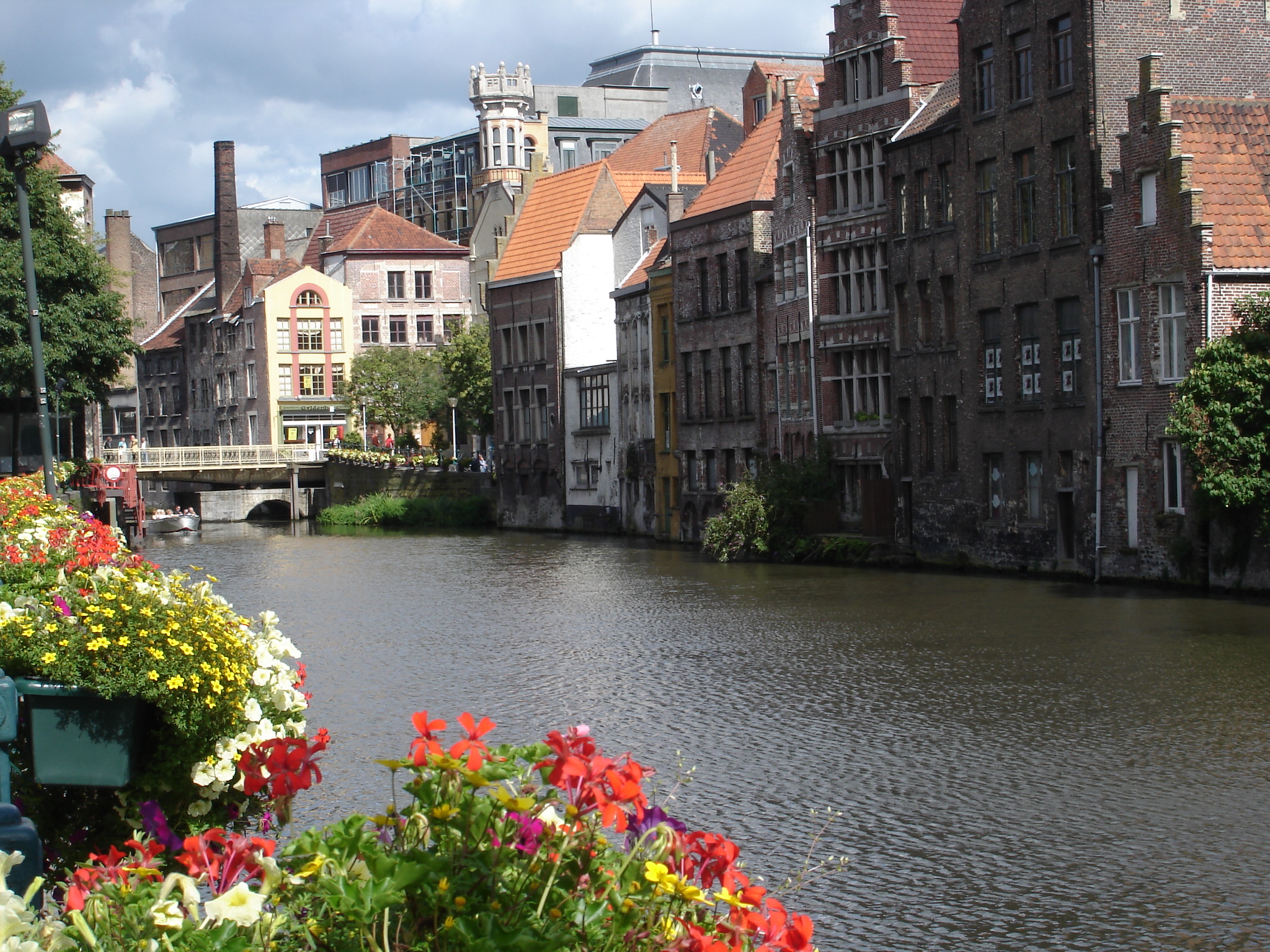 Today we went on a day trip to Ghent, which we loved.  It is a really picturesque little town, with massive cool building in every direction you turn.  We went into several cathedrals and generally wandered around lots of historical stuff.  Very cool. 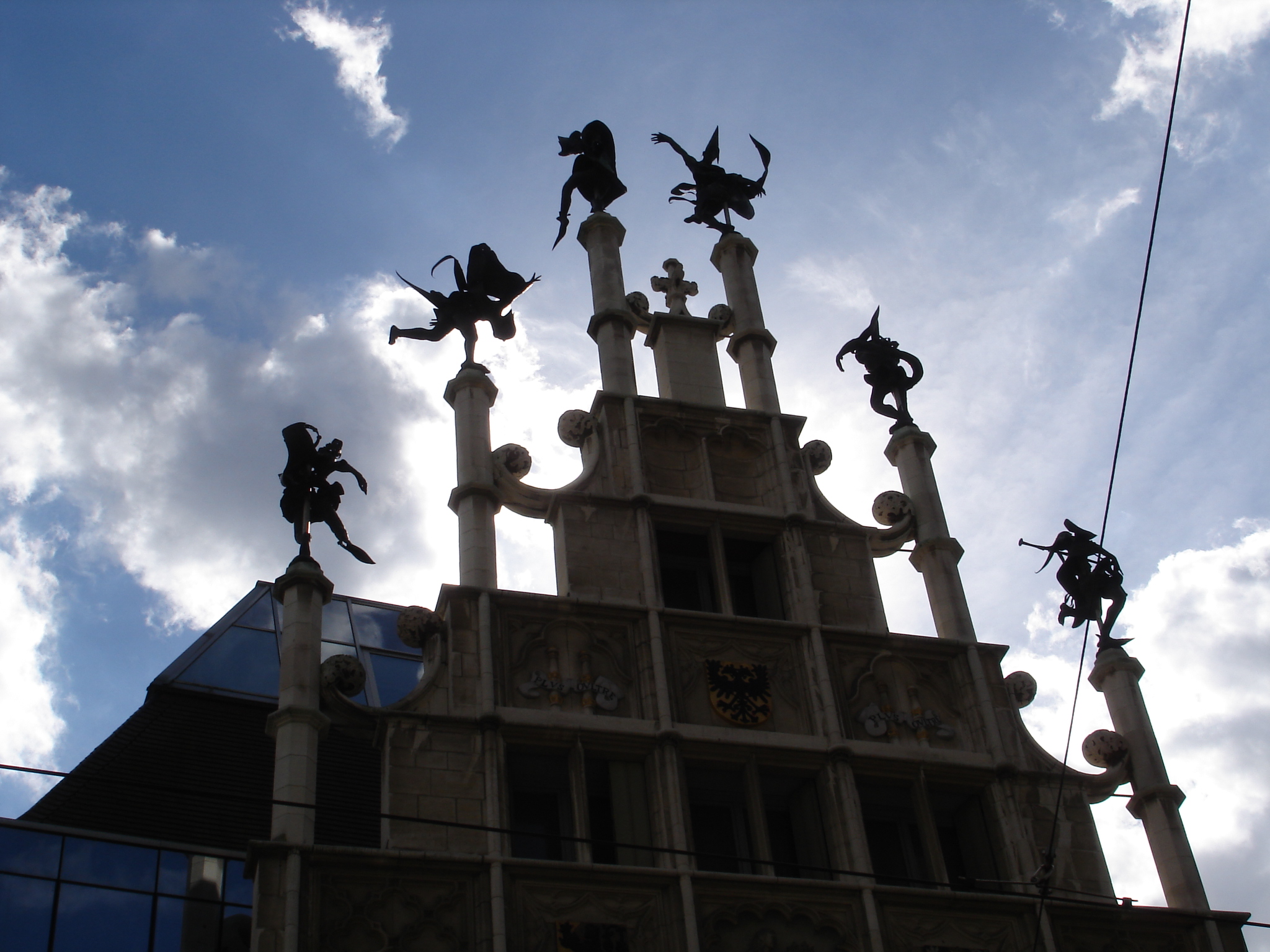 We saw quite a few buildings in this sort of style, very elaborate, with mythical figures attached in some way.  This one was particulaly cool. 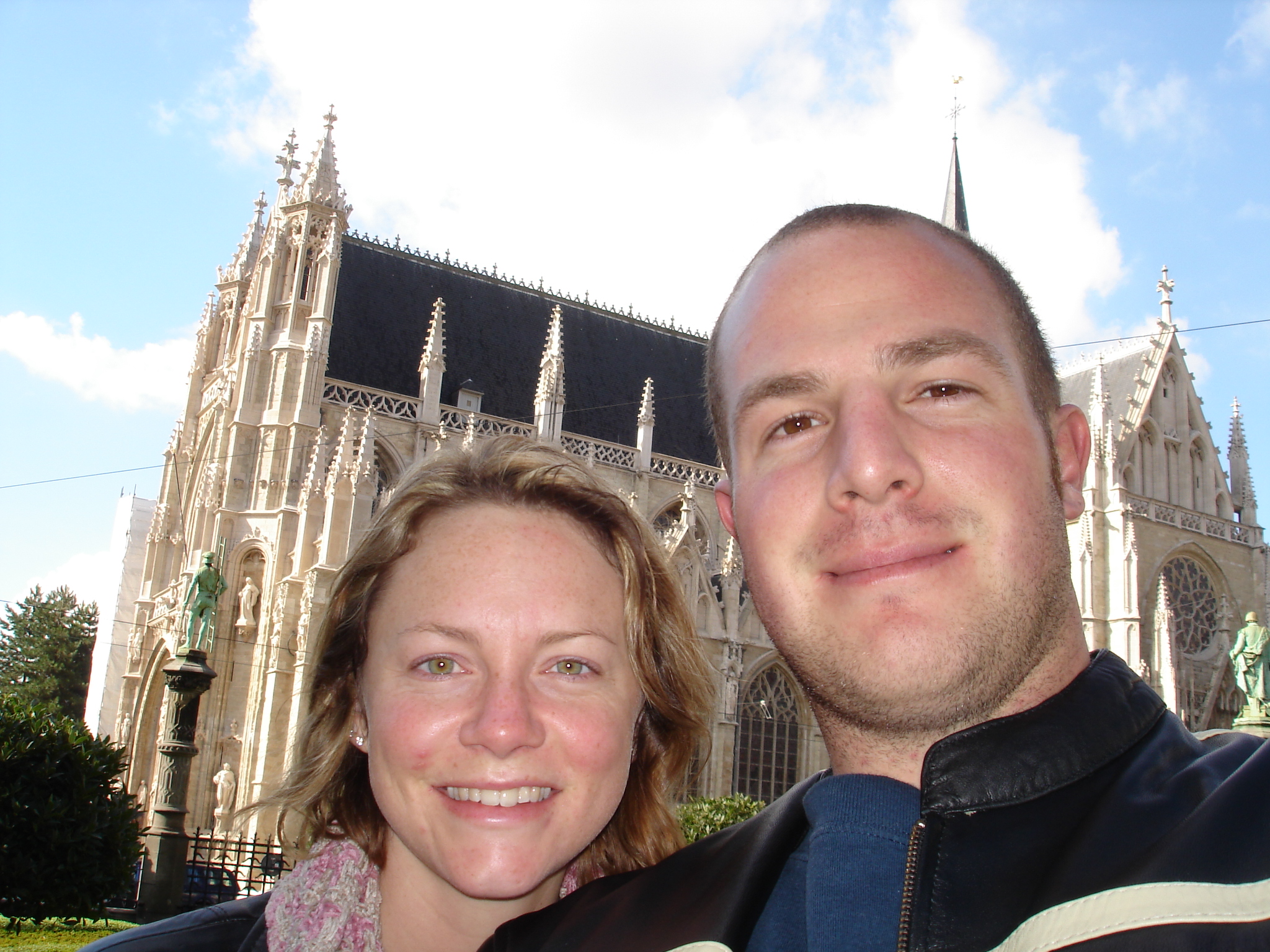 We have founds so many cathedrals in Brussels, just walking around we seem to find more and more.  This one was very beautiful inside, and very detailed on the outside also.  We also had a view over the city from up here. 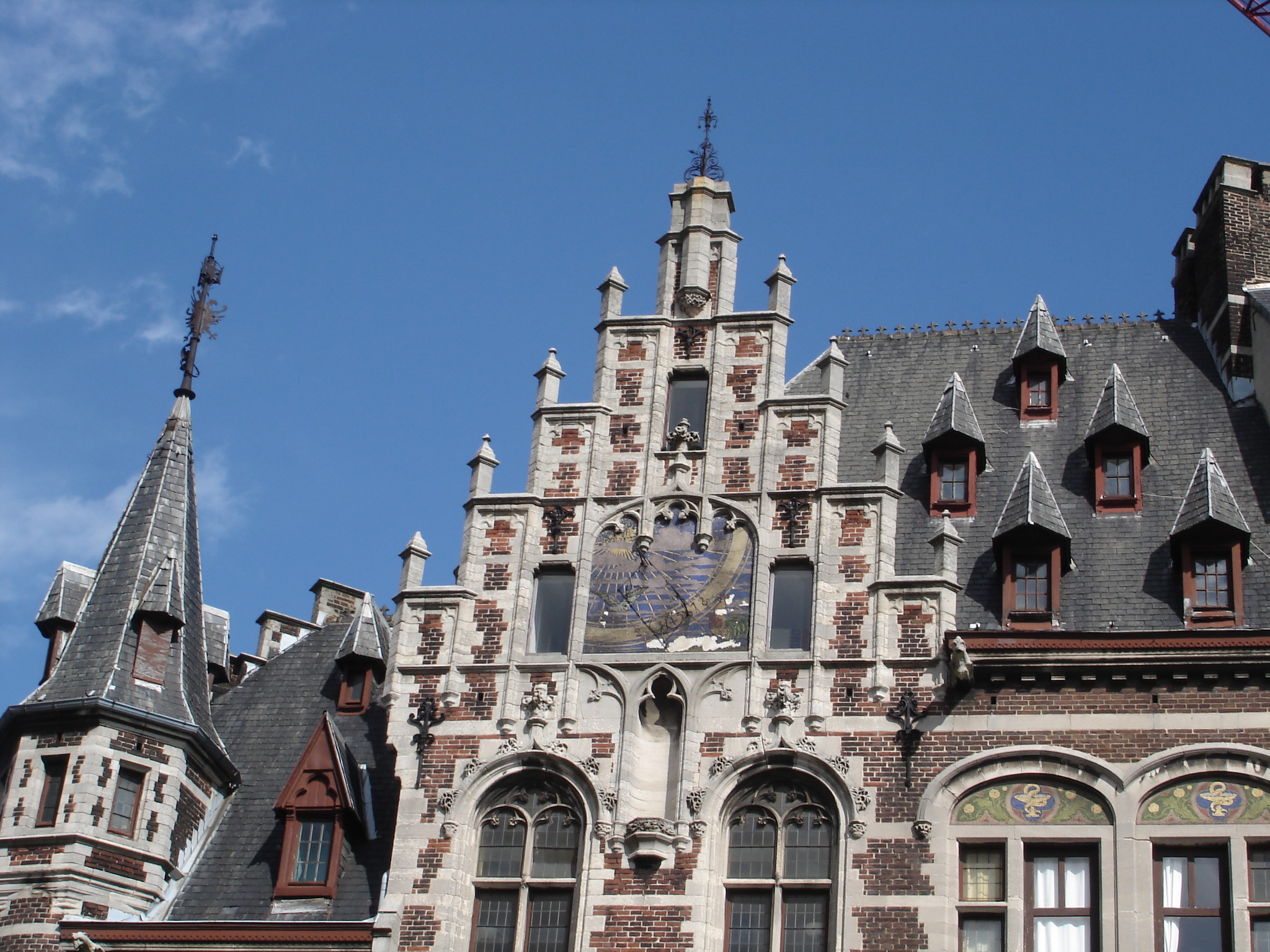 We have seen loads of cool buildings similar to this, some have crazy paintings and others have random things stuck to them (like plates, creatures, rope and tiles).  Basically they are really old and cool. 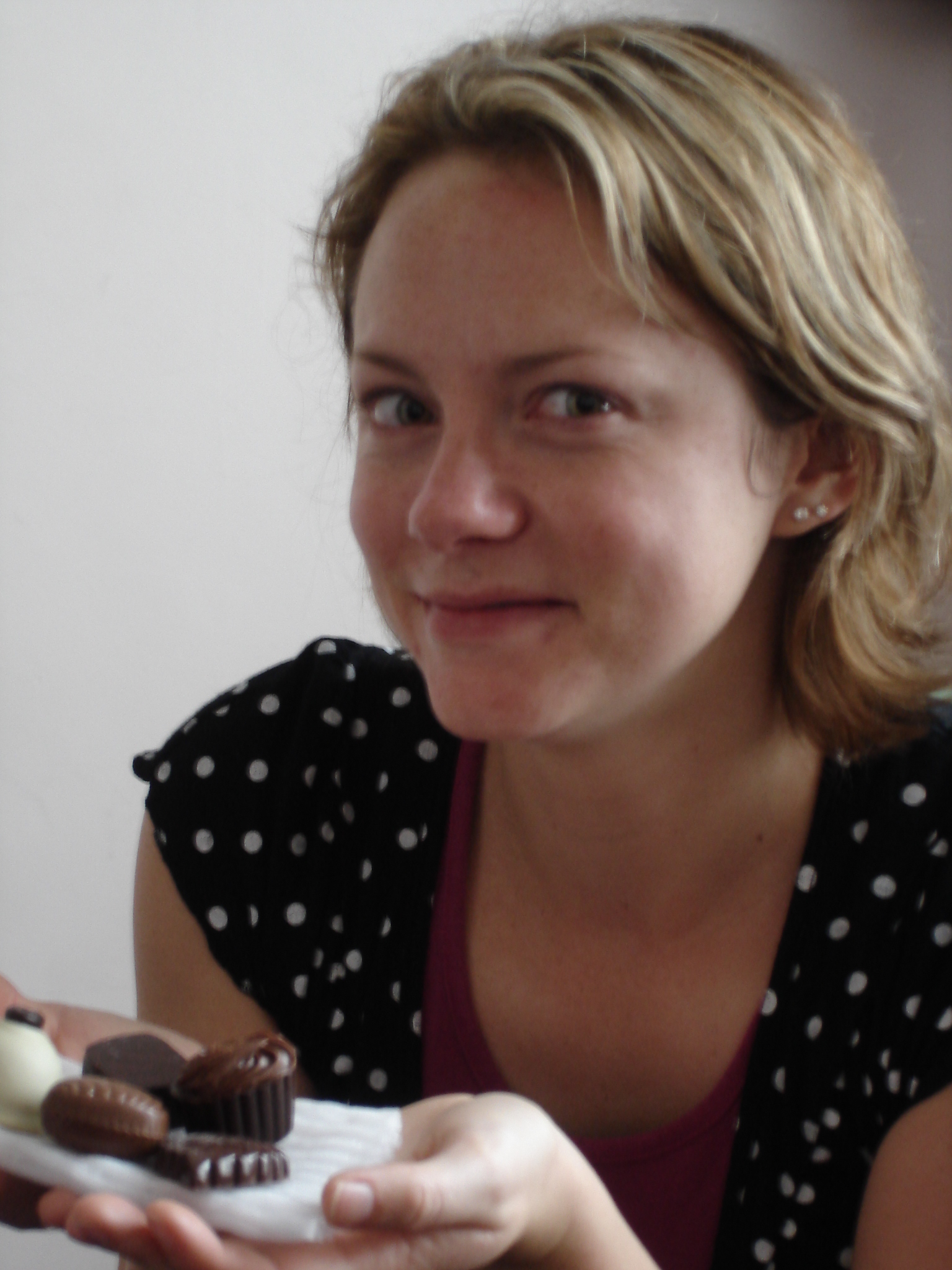 It’s a good thing we haven’t been counting how many chocolates we’ve eaten… they are so yummy.  Our favourites include the highest cocoa content ones, cherry (which have a real cherry inside), all the pralines, I guess basically all of them.  Mmmmmm Chocolate. 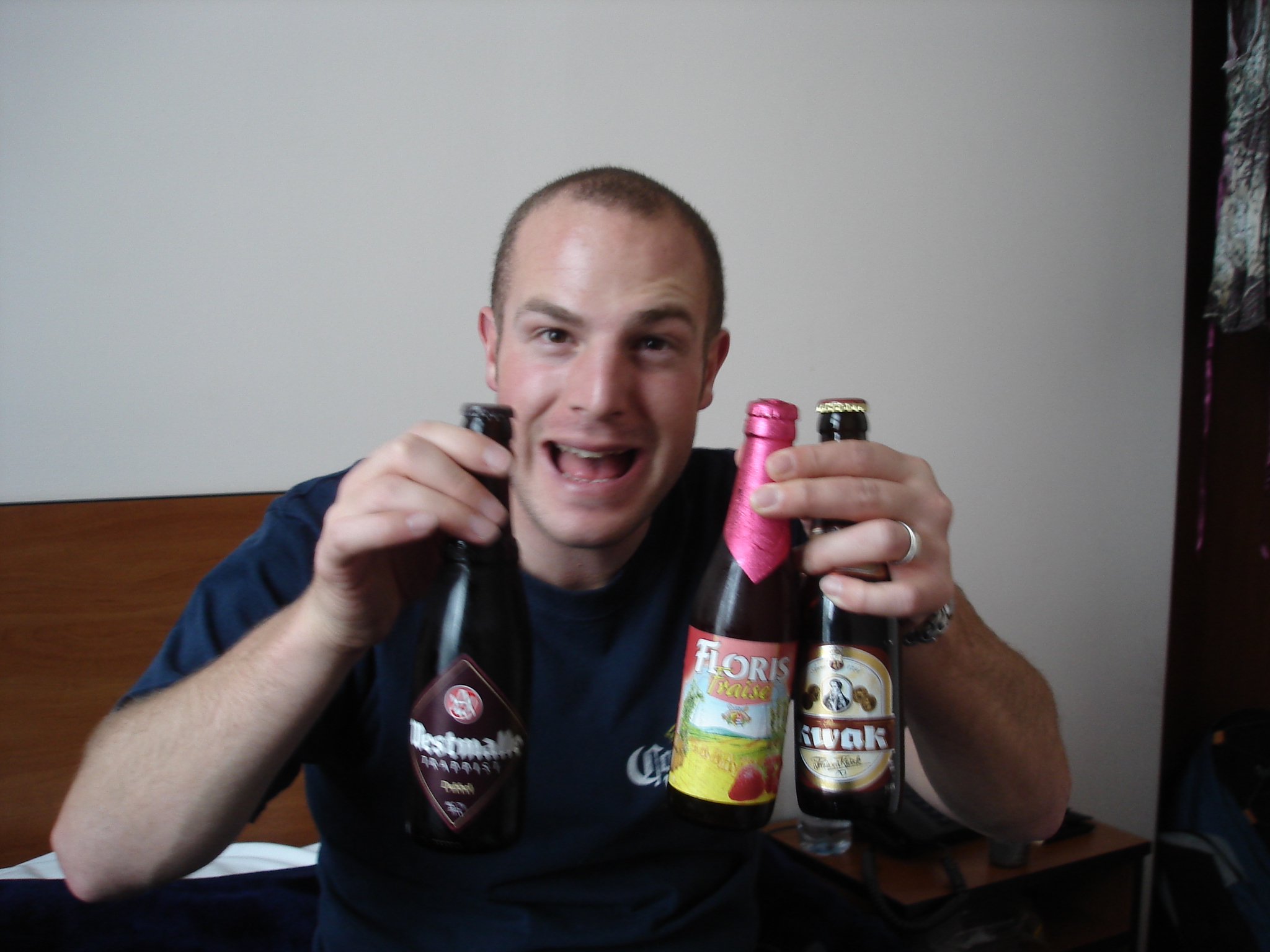 Here is Dre with a selection of 3 beers that he chose based on the pretty colours of the bottles.  There are so many to choose from, they even have strawberry, cherry and rasberry.  Also they are all about 8% alcohol so are quite strong.  Each beer comes with it’s own specially shaped glass to maximise the drinking experience.

When we first arrived in Brussels this morning, we managed to get very very lost, it started pouring with rain, and even the policewoman that we asked for directions didn’t really know where we were going.  Embarrassingly, it turns out our hotel is about 50 metres from the train station, but it took us an hour to get here.  It was very eerie when we got here, as today all the streets in the centre were closed for the Brussels Marathon.  When we got out of the train station it was so quiet, we wondered what was going on!  But have it all figured out now.  We have spent most of the day exploring the city and have a fairly good idea of the layout and how to get most places now.  So far we love it here.  It has a very relaxed feel, but there are so many things to do!  It’s surprisingly not that busy with tourists, and tonight when we went for a long walk after dinner there weren’t many other people around on the streets, which makes a nice change from London and Edinburgh (where the Fringe Festival meant the city was buzzing).  We are looking forward to exploring more over the next few days. 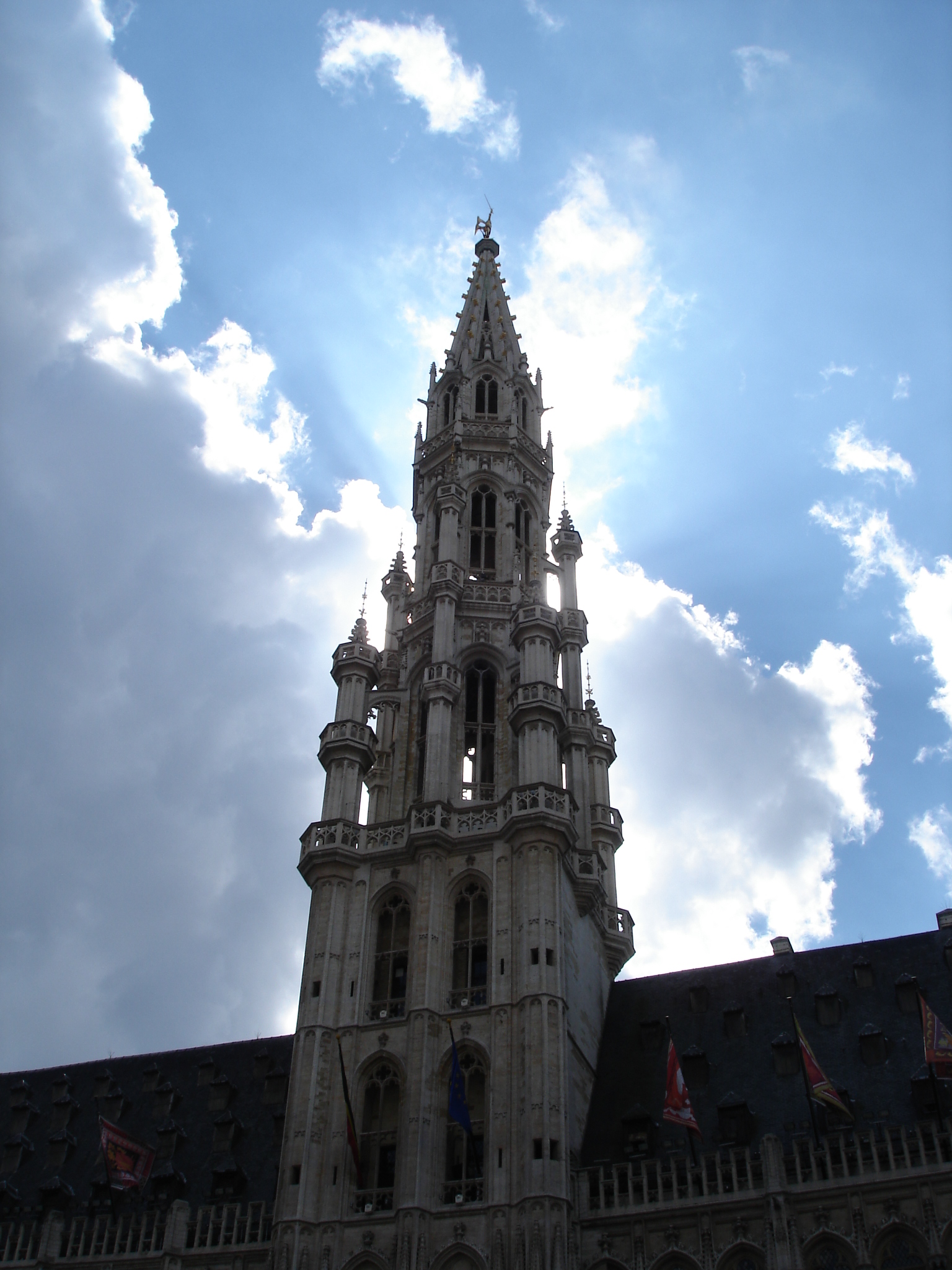 This is the main square in Brussels, ‘Grand Place’.  The buildings are absolutely amazing, the architecture is beautiful.  We had planned to go here but luckily stumbled across it within a couple of hours of arriving, the museum here has loads of interesting stuff, but the square itself is the main beauty and what draws most people.  Definitely a highlight so far. 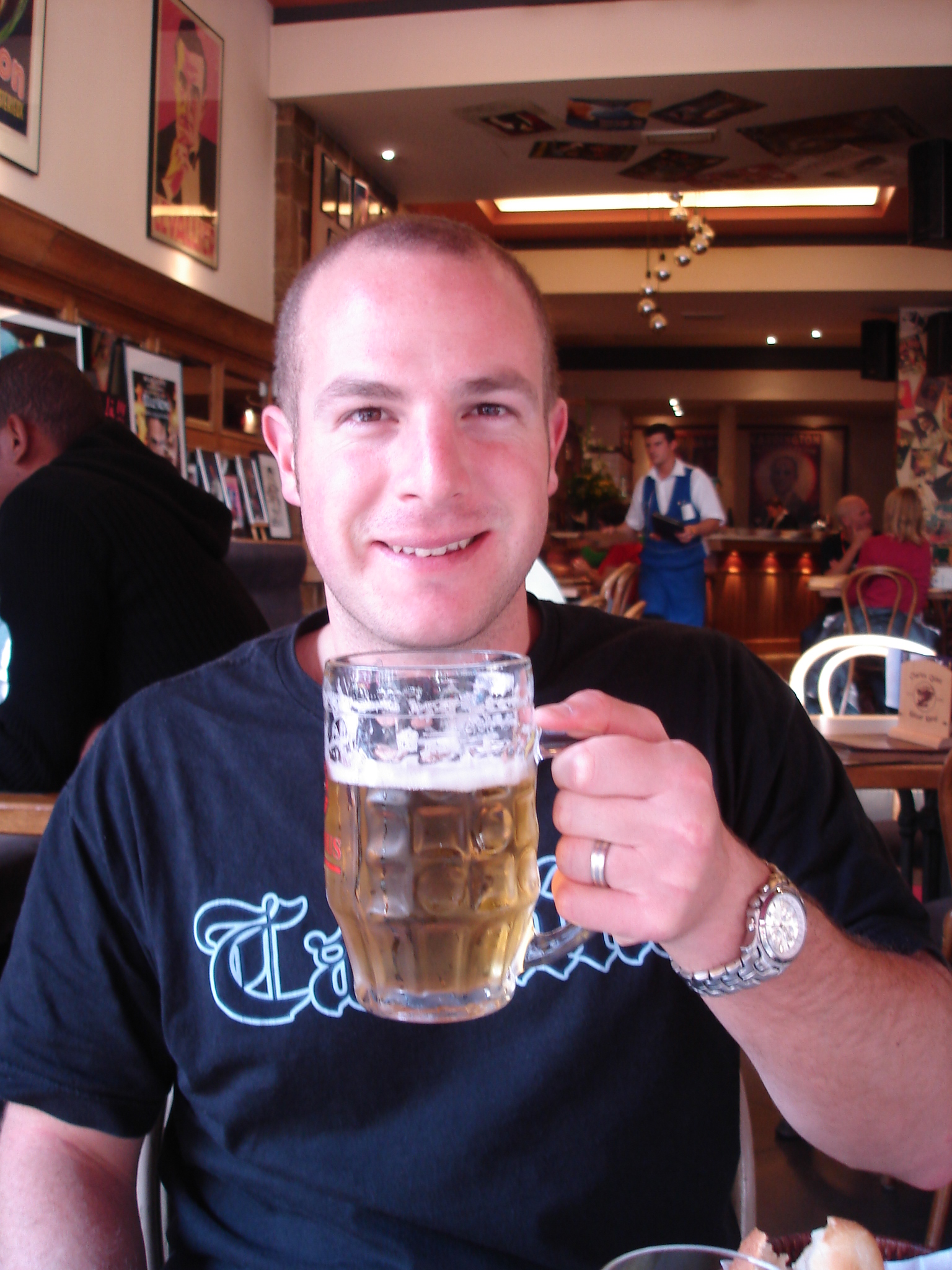 We’ve been here an hour… didn’t take us long to begin sampling the local cuisine.