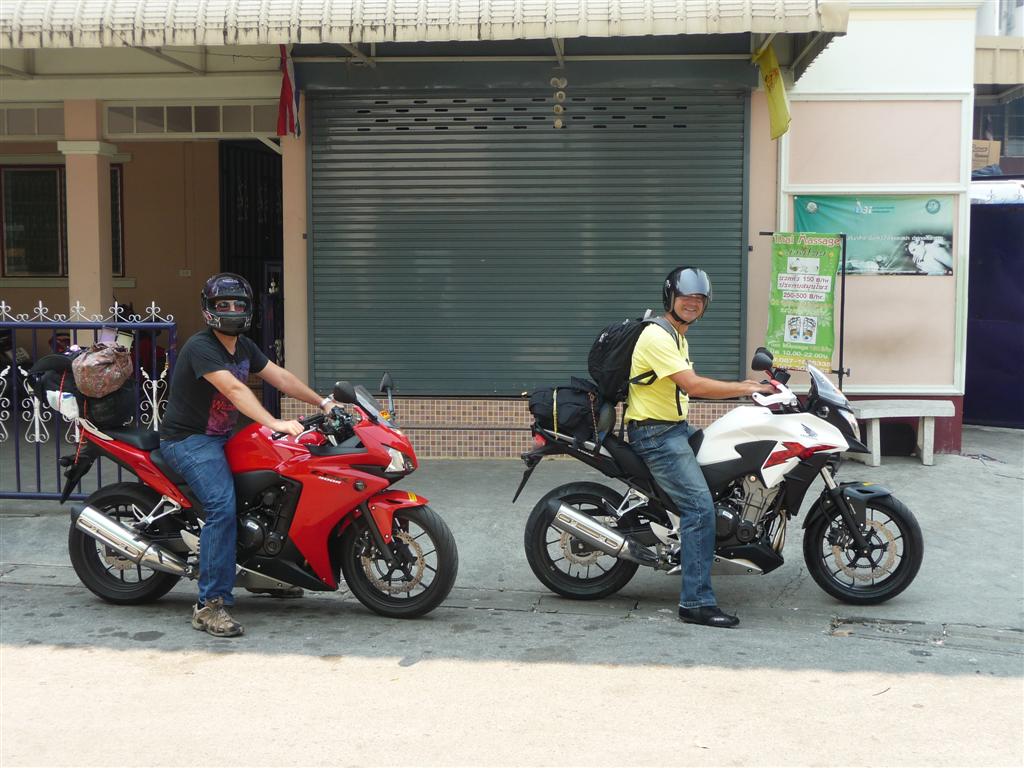 We left Chiang Mai and decided that instead of going via the 4 lane highway to get to Doi Inthanon we’d take some smaller roads. The first hour or so we were all surprised by how built up these roads were, but after that we started to get into open spaces and some lovely scenery. Even in the first hour, there were beautiful tall trees lining the road for most of the way. 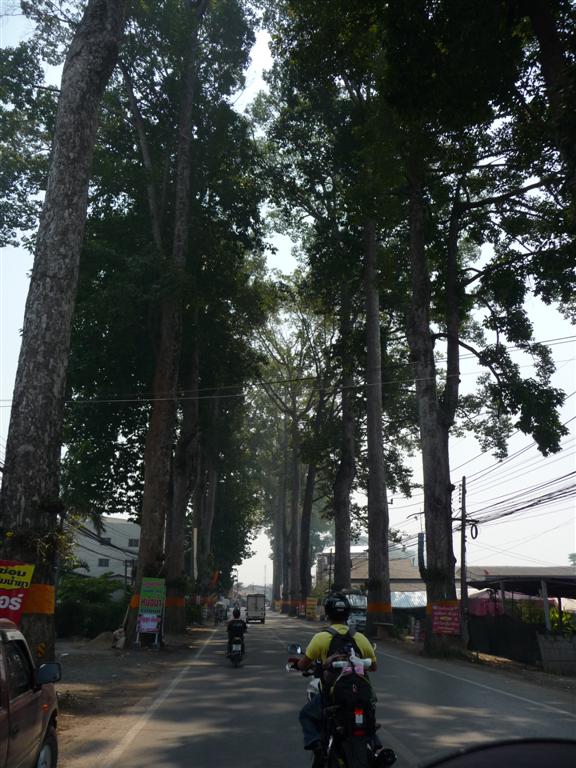 Eventually we stopped for lunch at a place that turned out to be so nice that we all agreed that if the accommodation inside the National Park wasn’t great, we’d come back and stay there. 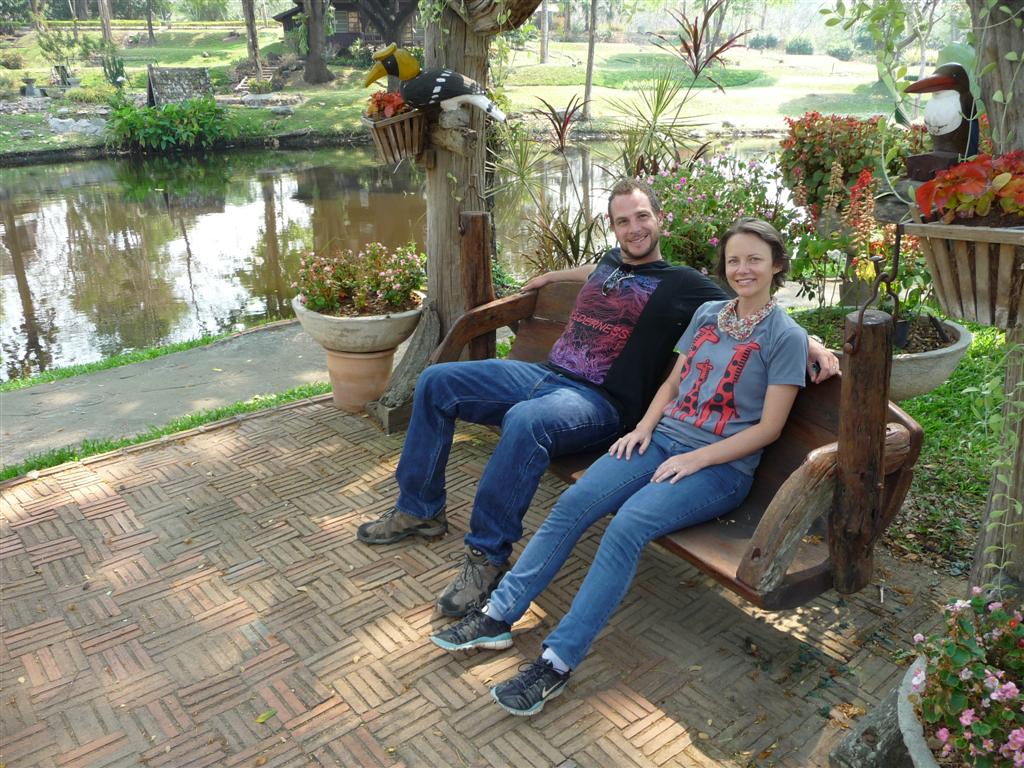 There was a lake and huge trees and hundreds of birds all around with houses to rent by the night, and it was just a few minutes before the turn off to the Park. 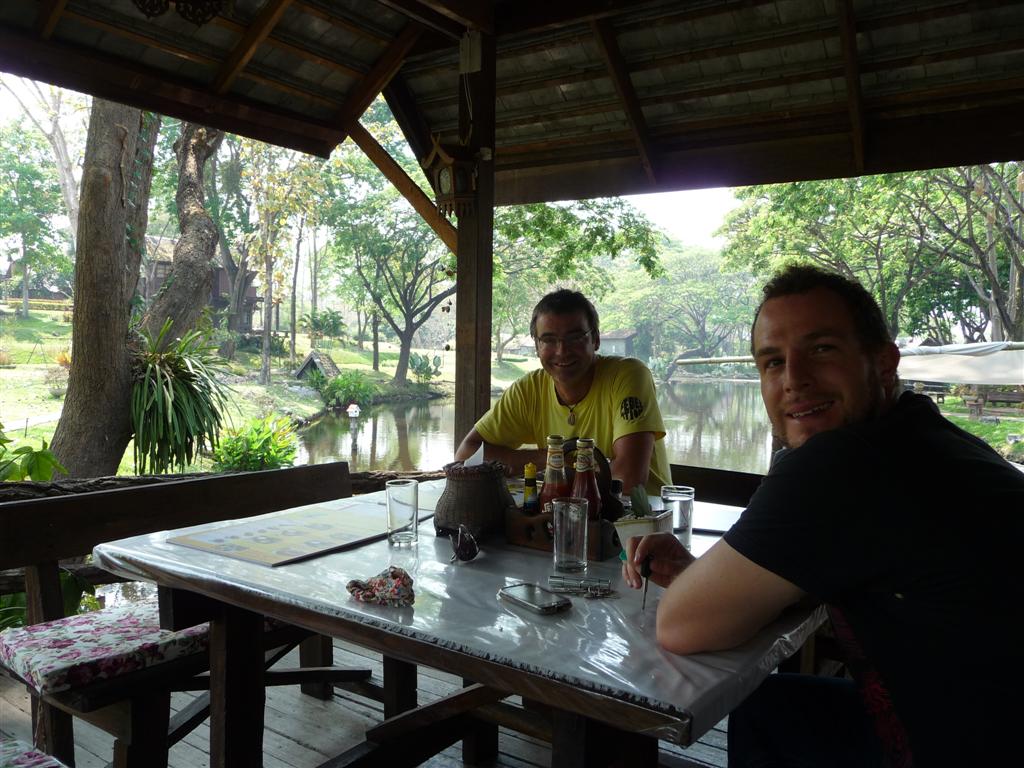 After entry to the park we drove up and up and decided to stop and see a really cool waterfall. We walked up for half an hour or so and got to a beautiful big waterfall. We clambered over the rocks to stand in the spray of the water. After considering drinking some, because it looked so clear and nice, reality kicked in and we all decided it probably wasn’t the best idea in the world. Surprisingly, there were many kinds of plants that grow in New Zealand here, with the cold and wet climate around the waterfall (at this point we were about 1500m above sea level so it was quite temperate). There were fushias, ponga-like trees, ferns similar to what you see in NZ, and many flowers that definitely grow in NZ like hydrangeas and agapanthus. 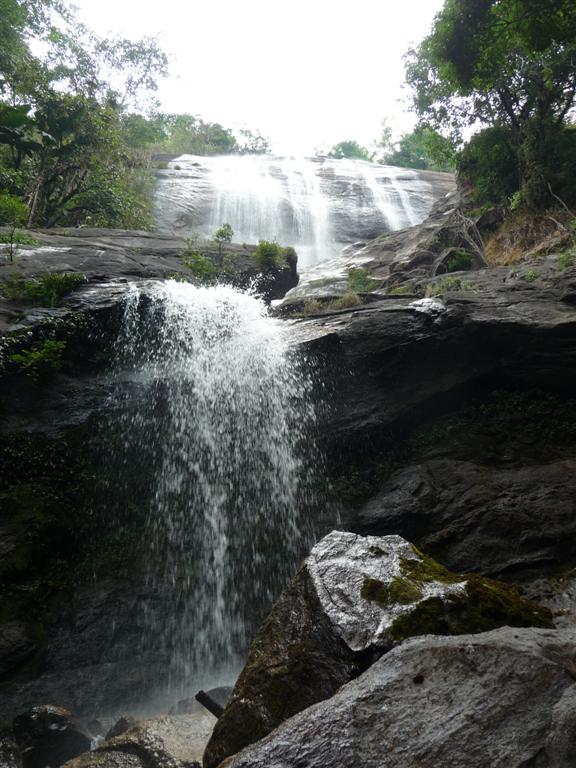 Next stop was the two stupas overlooking extensive mountains, the view was stunningly beautiful and the stupas themselves were dedicated to the King and Queen of Thailand and only built about 10 years ago so they were very pristine with extensive and colourful gardens. We saw lots of birds there too and behind the stupas was just forest and in front was forest covered mountains stretching off into the distance. 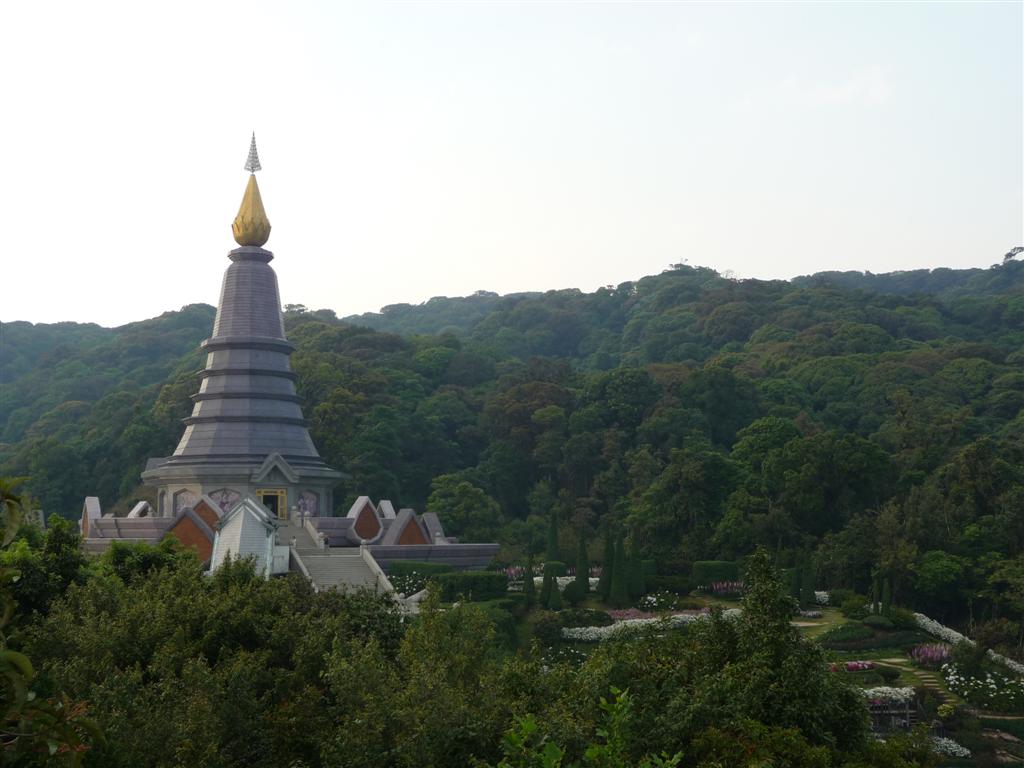 Then the summit was our mission, so we drove through all the huge old trees, and finally about 45km after entering the park we made it. We walked up another 100m or so and stood on the bit that was supposedly the top but there was a government “Neuron Monitor” on the top part! At the top it was about 2500m above sea level and really, really cold. 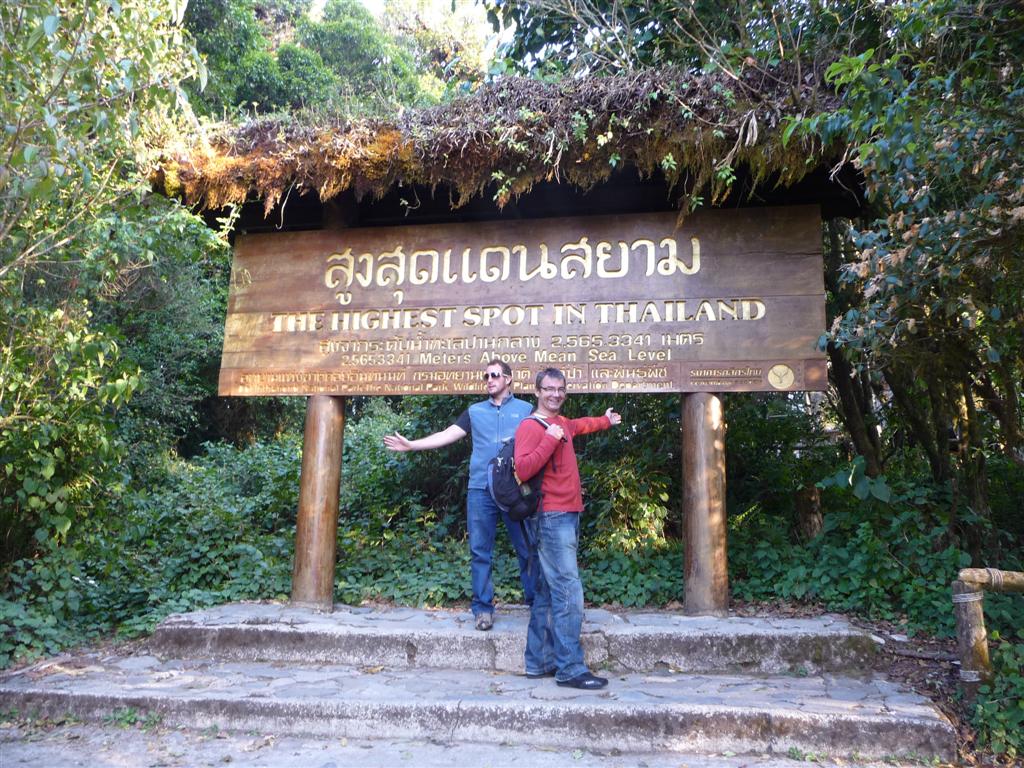 After freezing up there for a while we drove back down (wearing many more clothes) to find a place to stay the night. We ended up finding a small Karen ethnic minority village that offered bungalows overlooking either the river, mountains or rice fields. So we spent the night in the National Park and woke to the sounds of birds and insects. Dre and Tim took the bikes to the market and bought us a feast of fruit for breakfast. 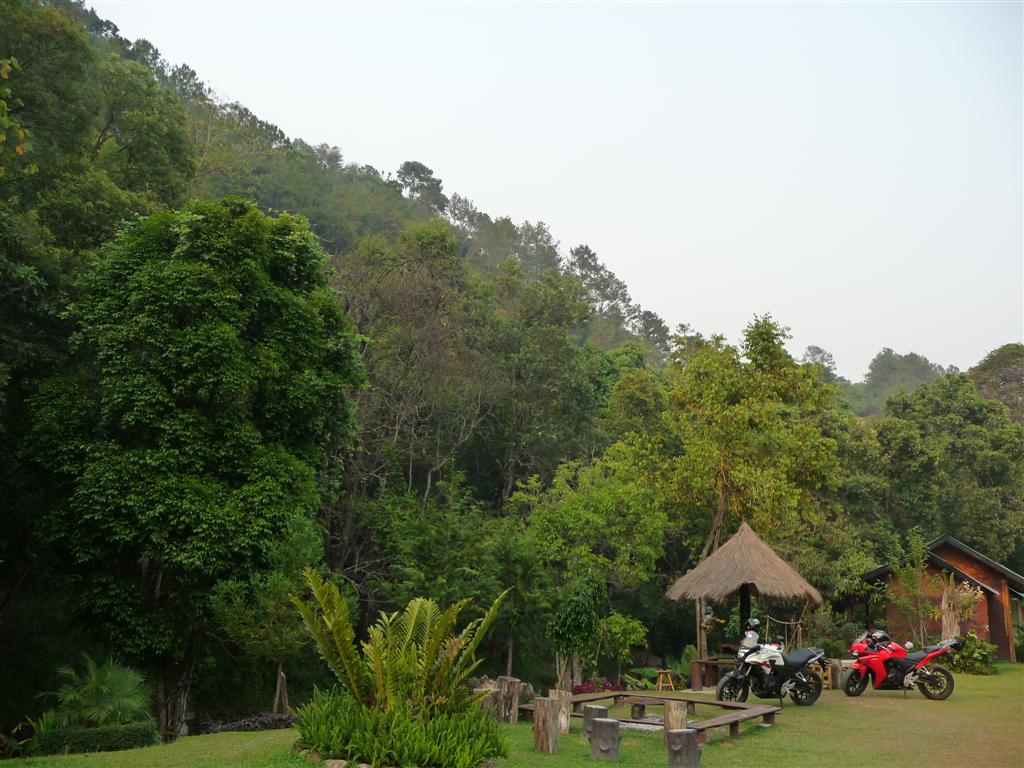 Today after sitting around for a while admiring the view and chatting, we returned to our respective huts to pack our stuff and leave for another day on the bikes, but we all decided at the last minute to stay here another day. It’s so peaceful and beautiful and there’s still loads of the park to explore so we decided chill out here for the day. 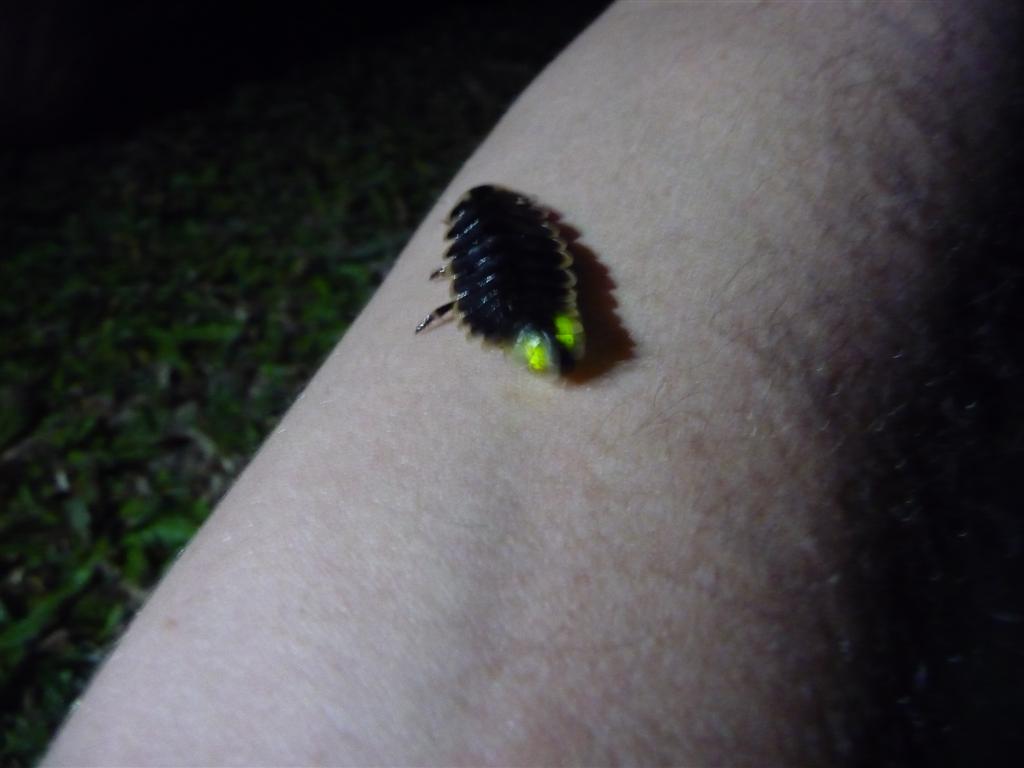 We didn’t do much, other than discover that the Honda CB’s have a beer opener built in (perhaps not quite what it was built for… but perfect!), saw some cool birds while lazing on the riverbank and our balconies, and found an amazing caterpillar-type thing in the dark that was glowing.  We found it because the glow was so bright that when walking across the lawn from Tim’s hut to ours we stopped to see what the lights were.  We found that it could turn it’s glow on and off at will, and watched it for quite a while.  Definitely a good choice to stay here another day!