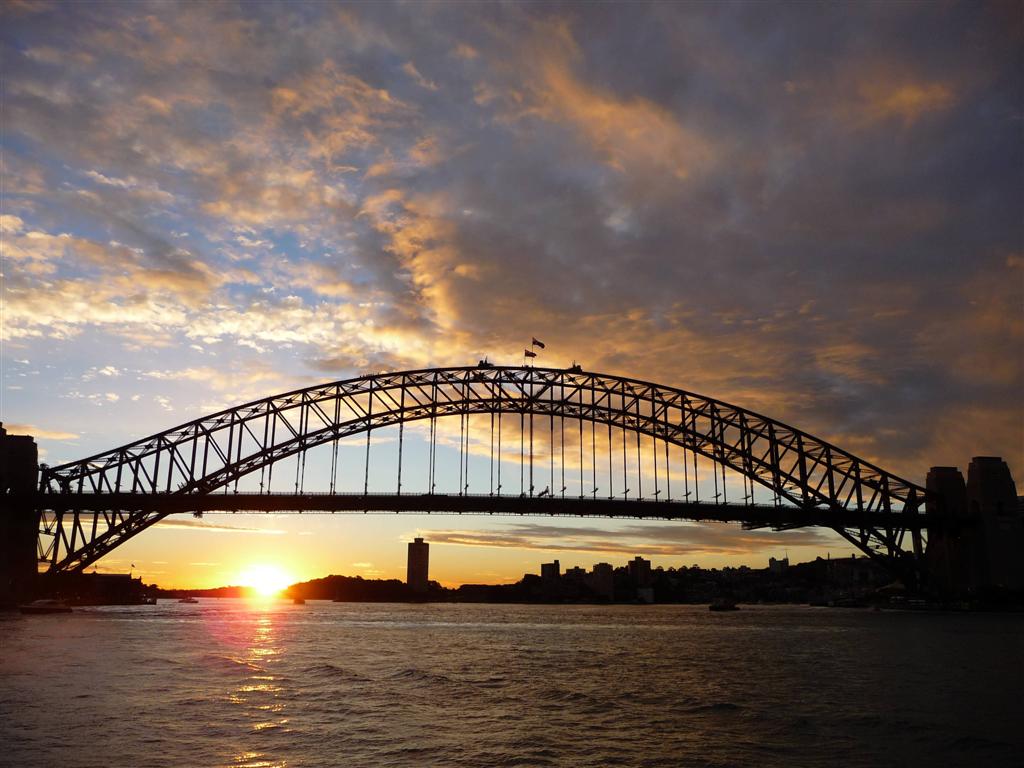 Sydney was full on, beautiful, busy, and reflective for us.  We started off arriving on Sunday night; Nerida and Paul picked us up from the airport and we had a casual dinner at their house in Bondi.

Monday:  We went over to Manly on the ferry and saw our first magnificent Sydney sunset over the bridge and opera house.  We were reminded of Sydney’s beauty – the harbour, bridge, opera house, national parks, north head – there are definitely parts of Sydney that will stay in our hearts forever and the Sydney Opera House is still our favourite building in the world.  We had dinner with Andy, Steph, Janie, Iain & Sandra in our old hometown pad of Osborne Court.  It was awesome to catch up with everyone and hear of future plans, all while sitting in the neighbouring penthouse to where Sydney stole our hearts.

Tuesday: We spent some time on Bondi beach and had our first pies of the trip – there is a vegetarian pie store that has about 10 different vege options to choose from as well as gluten free options – yum.  We then travelled to Neutral Bay to meet up with Tim, Anita and Sean.  We had hoped to have dinner at our former favourite Japanese restaurant, Dan Dan, but it’s sister restaurant Sushi Samurai had taken over both and so we ate there.

Wednesday:  A long trip over to Cromer Heights.  We found Jen’s house and knocked on the door and Steve answered (at this point in time we hadn’t met Steve yet) “Hi, is this Jen’s house?”, Steve, looking very confused… “Yeah….”, “Hi, I’m Karen and this is Dre, you must be Steve…” Jen leaning over stairs “I was expecting you guys tomorrow!”  “Really?”  “Yeah… you said the 9th didn’t you?”  “Ummm….  well, today’s the 9th?  Isn’t it?”  Haha.  So we arrived at Jen’s house a day earlier than she thought we were, but yes, it was the 9th, and she’d invited everyone else to come the following day.  Not to worry, we were here for company, so let’s cook and then eat!  So we raided Jen’s fridge and proceeded to cook dinner while she phoned friends who were meant to come tomorrow.  Lee turned up, so all was not lost.  Sadly we didn’t get to catch up with Gracie, maybe next time.  A delicious dinner and lots of wine was had by all, and all in all it was an awesome night.

Thursday: We made it back to Bondi from Jen’s by about lunch time and arranged to catch up with Julia and Sam.  We were going to meet them in the city but then we all decided Bondi was the place to be.  So we walked down to the beach and met up with them.  We all did the beginning part of the Bondi – Coogee walk, sat on the beach until the sun started going down, and then walked back into town for some drinks and snacks.  We then proceeded to have a yummy dinner cooked by Paul, a fish curry.

Friday:  OK so by now we were realising that we should have allowed a few extra days for Sydney!  We met another Paul in Lane Cove, and proceeded to sell him many of our worldly possessions that we no longer need for our Asian lifestyle.  We then moved on to our beloved Manly, where we had a typical “Lauren” meal, nothing less than a 5 star restaurant quality, 3 course, wine matched meal.  Ben cooked prawns and yabbies on the bbq while Lauren made a delectable tuna cevice, a cauliflower puree with Marlin and salads, and a berry compote for dessert.  YUM.  Lauren, you remain our favourite chef.

Saturday:  Stop off in Lane Cove again on the way back from Manly to Bondi.  Arrive in Bondi hungry and in need of a shower, late for our own party.  Nerida has organised almost all of our friends to come around and catch up with us (eternally grateful to you Nerida!) along with amazing snacks, like cucumber and smoked salmon and dill, homemade guacamole, veges for the bbq, and an amazing gluten free dessert.  Nerida, you are an amazing chef too.  So we spent Saturday lunchtime/afternoon catching up with Mikey, Costa, Nick, Amber, Hunter, Soph and Ryan as well as Nerida and Paul.  It was fantastic to meet Hunter, Nick and Amber’s son who is now one.  He is so much bigger than our nephew Storm, and of a similar chilled out temperament, exploring his world with curiousity.  Also it turned out to be our only chance to see Nick and Amber, and Mikey and Costa, so we were really pleased to have this time to chat and find out what’s been going on for these guys since we left.

Sunday:  Well, we had originally planned to have a chilled out morning and afternoon, after the Saturday, and then see Nick and Amber late afternoon and evening.  Alas, it was not to be, and we ended up seeing Anita for a coffee/fruit juice, Charlie and Deb for an awesome catch up at their newly purchased house in Frenchs Forest, and then stopping at Ry and Sarah’s house in Manly where we also managed to catch up with Steve, Carly and Cyrus by chance.  Catching up with Deb and Charlie was really good – they are 9 months pregnant and absolutely glowing with the prospect of their baby daughter being born, and their house was pretty cool too.  Then Ry and Steve entertained us for a couple of hours while Cyrus (Steve & Carly’s baby) slept and the girls were out in Manly.  It was an unexpected pleasure to catch up with Steve and all that has happend in his life over the 4 years since we saw him last.  Ry was just the same as we remembered him, and we honoured the night by getting tried and true Chat Thai for dinner, our favourite restaurant in Manly from when we lived there.

Monday:  We caught the train up to Woy Woy on the central coast, to see Scotty, Soph, Sammy and number 4 Paton who is currently cooking in Soph’s tummy.  It was a really fun day with a great Aussie seafood lunch, a trip to Sammy’s favourite park, where we rode the swings and watched Sammy ride the flying fox, then went to the beach, where it was far too cold and windy to stay, and coffees and afternoon tea at another park on the water before heading back on the train.  It was cool to see beautiful wee Sam all grown up, at 3 years old she has an awesome personality and is heaps of fun.  We then had our final dinner with Paul and Nerida; Nerida had picked up on the fact that the one thing we do miss in Laos is Salmon.  And so, we had a perfect last meal to end our Sydney experience:  Crispy skinned Salmon on the bbq, with a delicous salad.  Nerida, we really hope you know how much we appreciated all you did for us, especially the Saturday get together and the Salmon on the last night.  Heaven.  All of it.

And so on the Tuesday morning Nerida took us back to the airport to fly back to Asia.  We were left with so many feelings about Sydney that it’s hard to even begin to write about them all.  It was weird how everything felt both so normal, and yet so far removed from our current life, all at the same time.  It was sobering to see everyone ‘plugged in’ to their iphones/laptops/facebook/whatever else the current trend is.  “The Matrix” has reached reality big time.  It was sad to see so many people looking so disheartened and downcast about their lives or whatever it was they were headed off to do.  It was interesting too see how much a part of the rat race life in general here is.  It was awesome to see Sydney harbour in all it’s glory.  It was the best thing to see all of our friends.  We do miss all of our friends, and often think of all of you guys.  But in the end, right now, there’s not much on earth we’d give to exchange the life we have in Laos.  The freedom we have created there and the life we have is just something else.  We can’t wait to get back.