Our  journey to leave Luang Namtha this time was the worst ever.  Not that we’ve had a bad journey leaving before, but if we had, this one would have topped it.  We have travelled with chickens before, goslings, songbirds, a goat, but never before a pig.  Until now.  It started off alright, we found out on the morning we left that we could get a minivan, which is always a plus because it’s usually faster and more comfortable than the bus.  It’s normal for both the buses and minivans to stop along the way, if they have room, and pick up anyone who wants a ride.  This time, one of the guys who wanted a ride had a pig.  Oh my god the smell of this pig was disgusting, even Dre (who never feels carsick), for the first time in the entire trip was almost vomiting with the smell of this pig and the winding road.  We kept telling the driver “Bor hom!”  (Smells very bad!) but it didn’t make any difference – the guy and his pig needed a ride, and the driver would make money if he gave them one, so that was that. 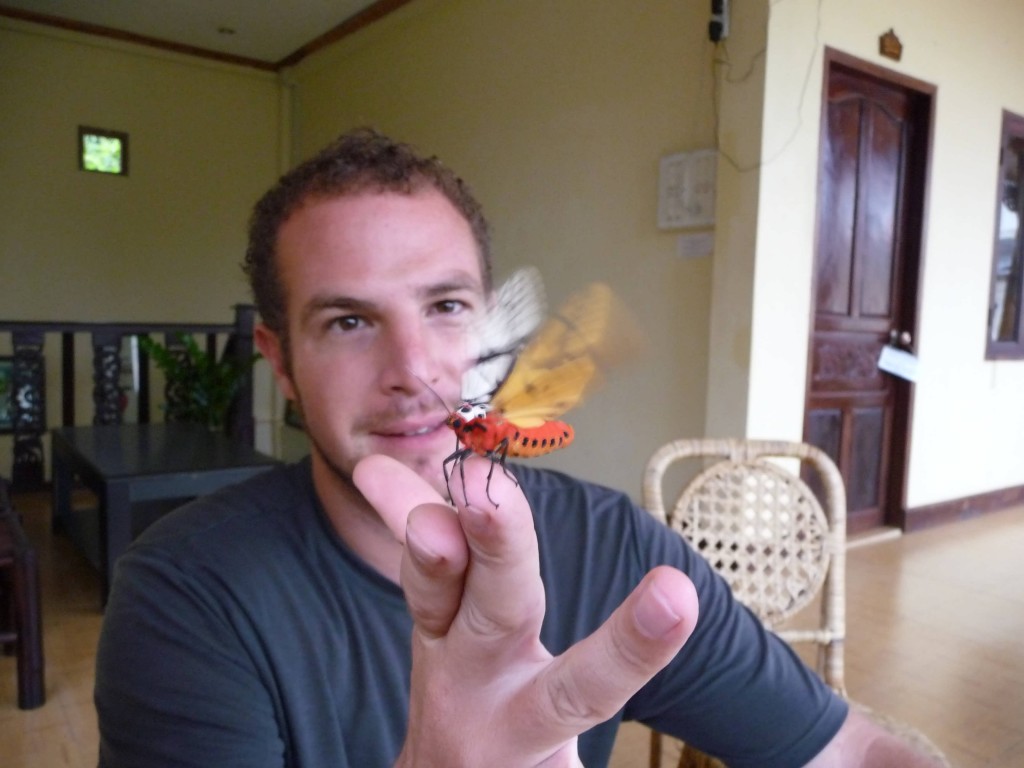 Finally after a couple of hours, man and pig departed our minivan and we all breathed a sigh of relief for the rest of the journey to the border.  Then, we managed to score the worst bus driver we’ve ever had in Thailand, with constant tooting (OK so you’d expect this in Vietnam, not Thailand though) and windows which were stuck open making 3 hours of gale force winds.

So now we are extremely pleased that this journey is over.  The final week in Luang Namtha was good though.  We got given honorary Lao names – Dre is Com Deng (Red Gold) and Karen is Bour Sang (Unfurling Rose emiting light).  We discovered one of the craziest fruits yet – jungle figs which are bright purple  on the outside, bright (almost flourescent) pink on the inside, with jelly in the centre.  We saw maybe the coolest moth we’ve ever seen, and Mrs Thoulasith (who we stay with) gave Karen green fabric to make another Lao skirt, so that it would match the green Forest Retreat Laos building.  (Paet then made the skirt, thanks Paet!).  And we taught Lai, one of our favourite local restauranteurs how to make hamburgers! 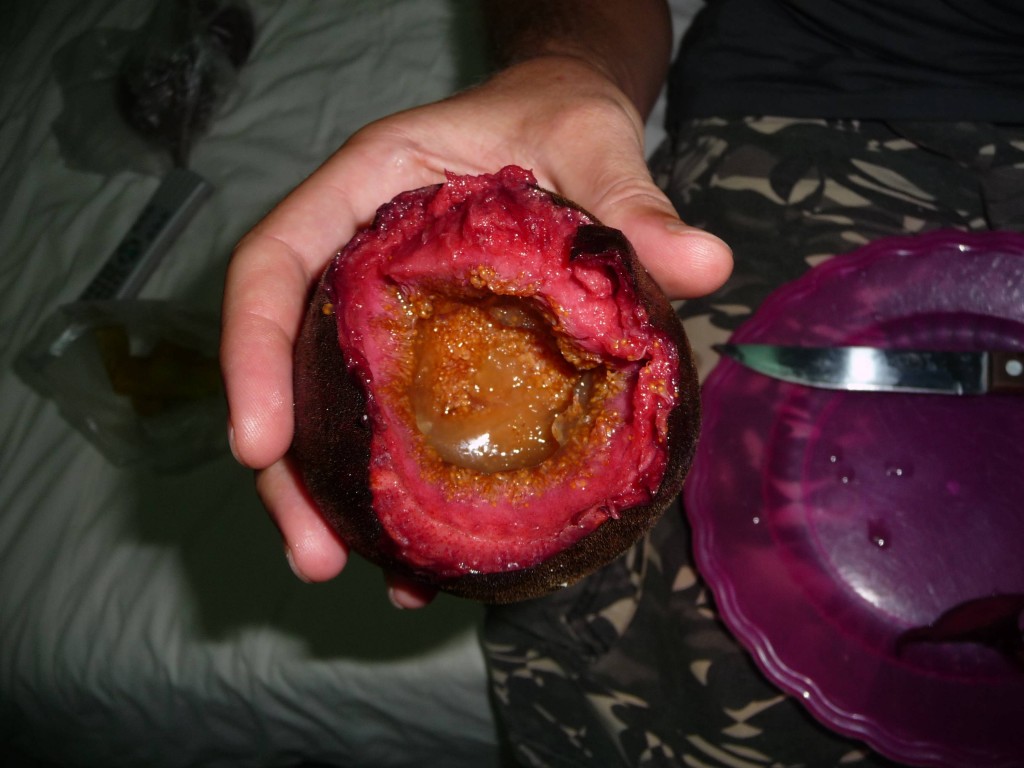 We also attended our good friends Alack and Deng’s graduation from English teachers training school.  This was both entertaining and gruelling – it was one of the hottest days we’ve had, topping 40 degrees and we were outside for 4 hours waiting for the ceremony to finish.  For entertainment while we waited, our other friend Bunmee decided it’d be a good idea to rent out his falang friends (ie: us) and charge his friends to have photos taken with us!  We thought this was hilarious, locals lined up to have their photo taken with their first falangs.  Then Bunmee wrapped some wire attached to a battery around his photo printer plug, and proceeded to print out photos of us and sell them for 5000 kip each. 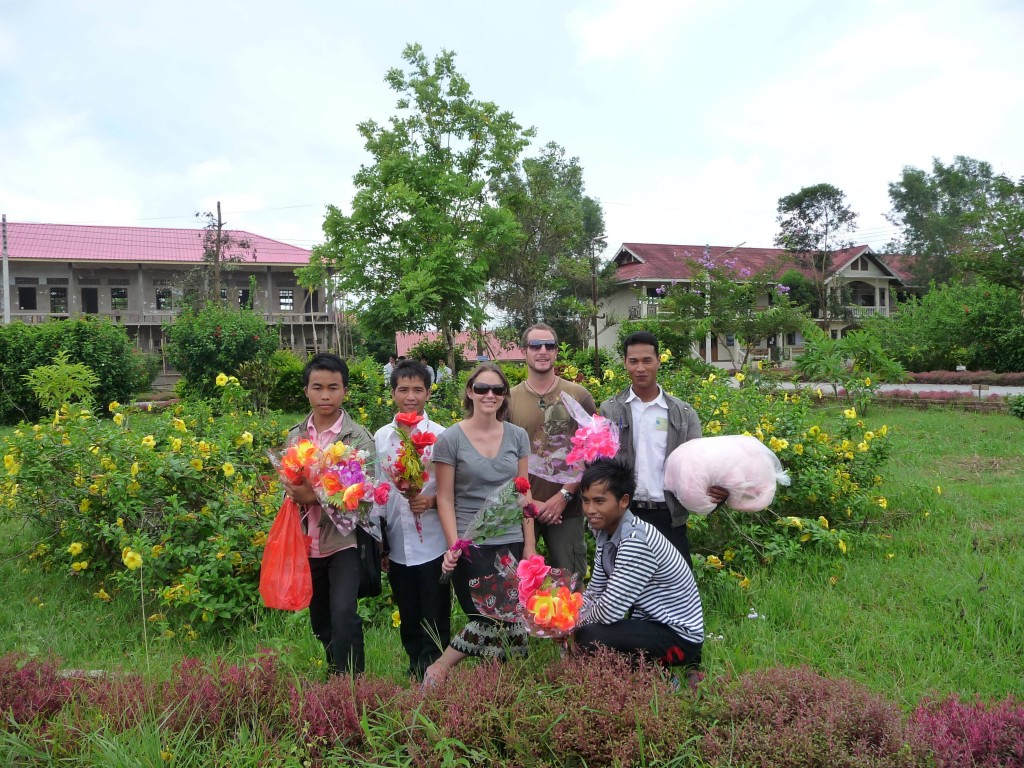 As well as that, we rode around on motorbikes with Thong and Paet, sorted out the Forest Retreat shop with many instructions for while we’re gone, and had yet another Luang Namtha leaving party arranged by Thong and Paet.

We are quite sad to be leaving this time but also super excited to see our families again soon.  Our photos are here.