The past week we’ve had dinners with friends and celebrations pretty much every day.  Firstly Shahu, our favourite Indian chef invited us for a special Indian dinner at his restaurant, then Thong and Paet organised a blessing ceremony for us so that we have safe travels until we meet again, and we also had a final leaving dinner at Thong and Paet’s house. 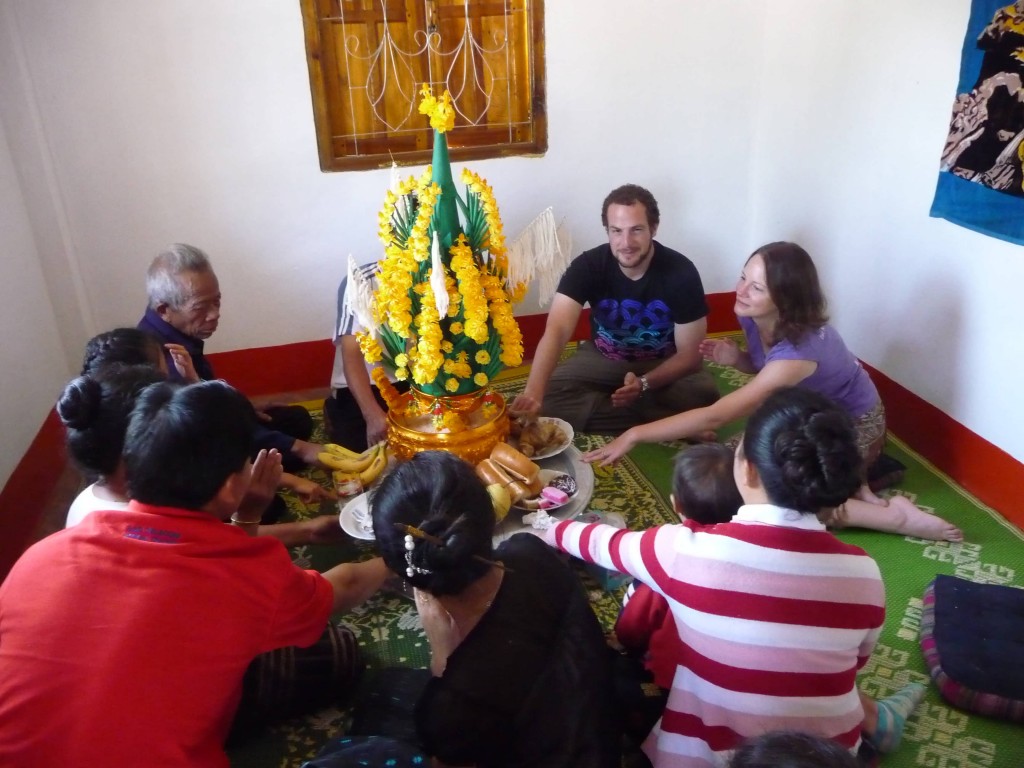 The blessing ceremony was so interesting for us, everyone brought an offering of fruit or bread and money and placed it around a centrepiece, and then we all had to touch the centrepiece while a Lao animist priest chanted blessings for us and then tied special string which had been blessed and dipped in alcohol around both of our wrists, and then everyone else at the ceremony also came up and tied a piece of string around each wrist of both of us while saying some Lao blessings.  It was so amazing to think that we have a group of people here that would go to such effort and care about us so much.  They then gave us a bowl of all of the blessings of food and money.  It was really touching.  Then a couple of days later we met a guy named Lou who spoke good enough English to explain to us what the ritual actually meant… it’s pretty hard core… the ceremony is basically to bring your soul back into your body so that you will be safe and strong on your travels – if they don’t bring your soul back into your body then it remains stolen by the animals and spirits of the dead.  It  also puts part of the persons spirit into yours (the person tying the strings) for good luck.  Hmmm.  This guy sat there explaining this ritual and belief to us for about an hour to explain all the intricacies of the  belief – it’s very detailed so if you’re interested, here is a link explaining it in detail (yes we are geeks but were both so interested about what the guy Lou was telling us that we wanted to read more!).  Need we say that we’re both so looking forward to coming back here soon? :-)