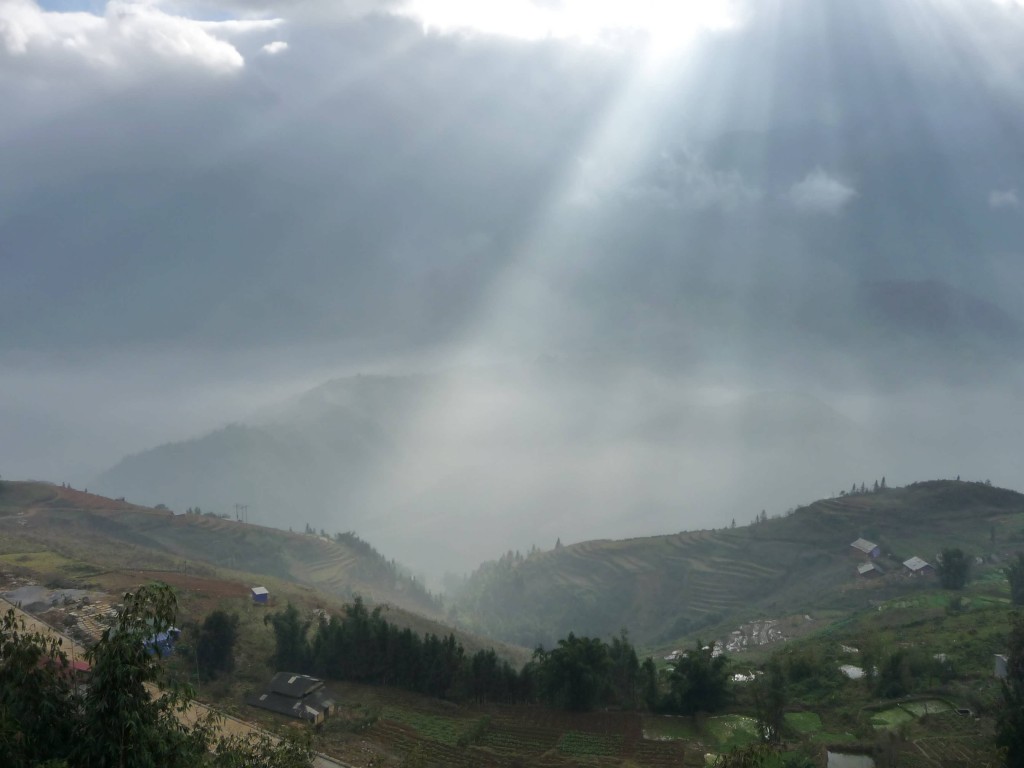 Our time in Sa Pa was very different to how we thought it would be.  We had been told that it would be cold and misty, and that there would be  a lot of hill tribe ladies hassling us, both of which we were mentally prepared for.  We didn’t really have any comprehension though, of how intense both of these factors would be.  Although we booked the hotel with the best view in all of Sa Pa, we got to see the view of the mountains and rice terraces for maybe a few hours in the entire week we were there – the mist was just too thick.  We also realised that it wasn’t really mist, we were actually in the clouds.  This turned out to be more beautiful than we could have known, watching the clouds move and change shape – often taking seconds to entirely change the view – was really amazing. 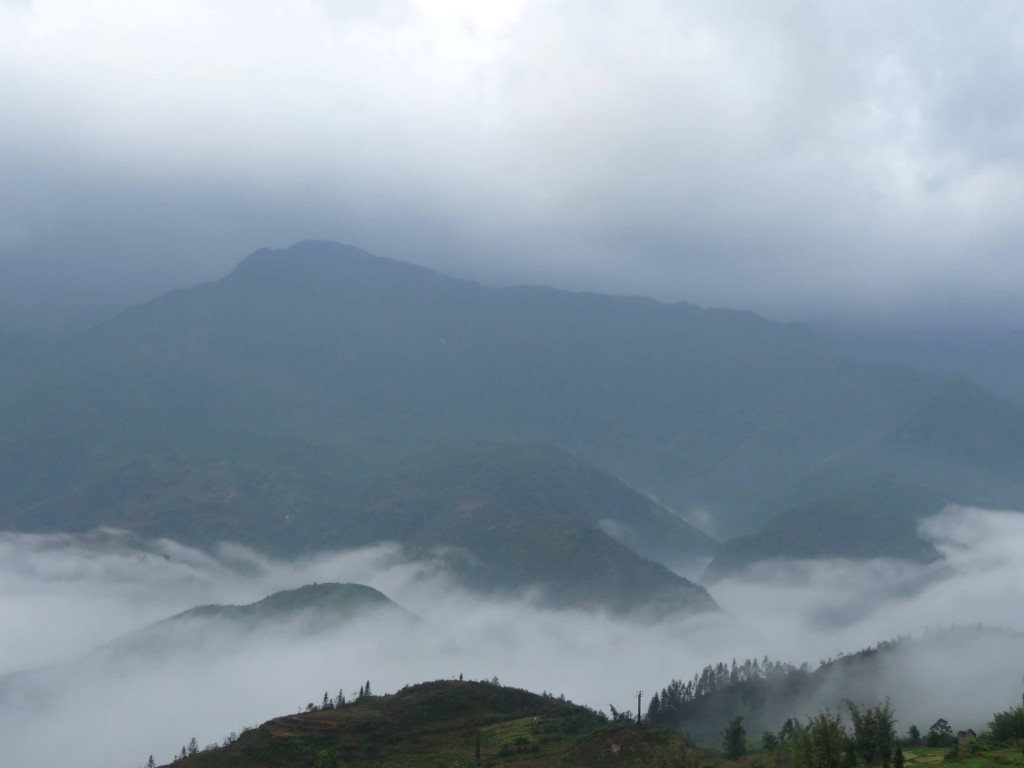 The hill-tribe people in the town were intriguing.  We have encountered many hill tribes in our time in Asia so far although none of them have integrated themselves into the town as they have in Sa Pa.  Hundreds of Hmong and Dzao people roam the streets just waiting for tourists to pounce on.  Their interaction with tourists ranges from pleasant, very friendly conversation, to hard core “Buy from me!  It’s not fair you don’t buy from me!  You are very bad person!  I think your country ashamed of you!”  It was a lot more full on than we were prepared for and at times quite unpleasant being endlessly followed and harassed.  In saying that, we also had beautiful Vietnamese, Hmong and Dzao friends within a few days of arriving and our best times in Sa Pa were spent sitting at the local market, drinking many teas and coffees with these lovely ladies.  It got to the point where our friend Bich would make us tea and coffee and refuse to let us pay because “We are friends, and if you pay me then we are not friends” and our lovely Hmong friend Mor and her baby Hoi would sit and talk with us for hours at times, explaining life in the Hmong tribe and asking about western life.  Mor is a beautiful 17 year old, who has a 11 month old baby which is very normal in the hill tribes.  Many of the girls are married at 14-15 years old and have several babies while still in their teens.  Then by contrast our Vietnamese friends would make us passionfruit tea (freshly scooped out passionfruit pulp and hot water) and happily talk about how they were very old (both 30 years old) and hopefully one day they would get married. 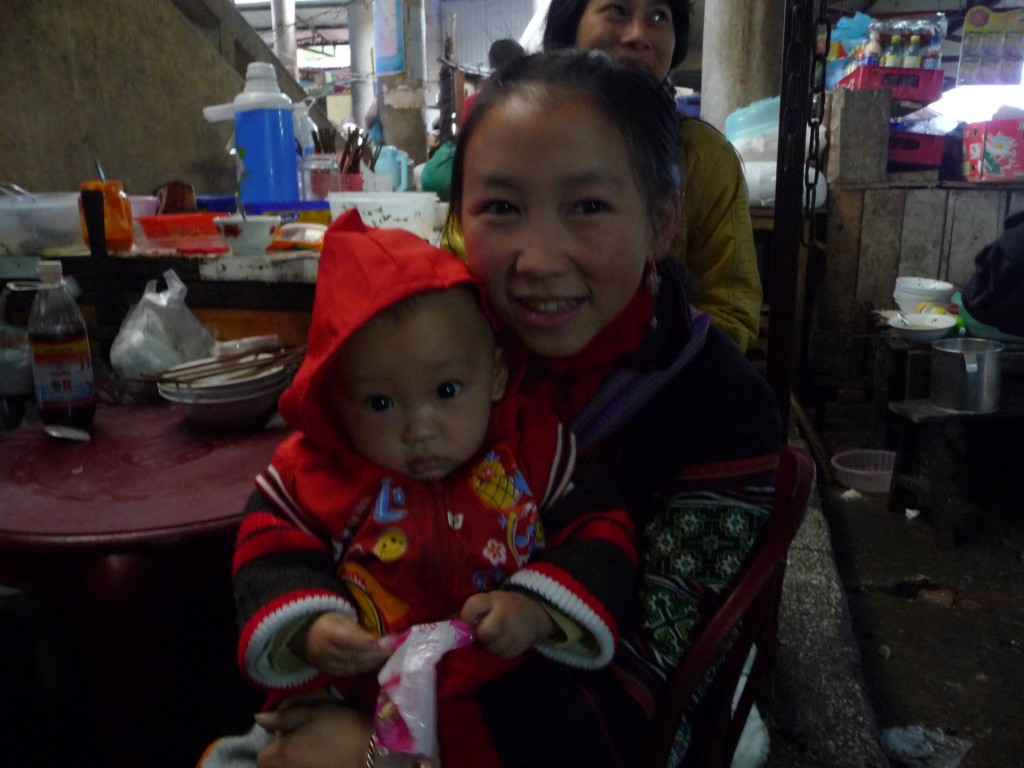 The main topic of conversation was always marriage and babies and the whole week we had people telling us we should have a baby and wondering why we hadn’t already had one or many more – it is incomprehensible here to be married for 5 years and not have children.  One funny night after explaining why we did not yet have children, we ordered a bottle of local Black Hmong Apple Wine – the lady asked us if we were sure and we said we were prepared to give it a go!  It arrived in a plastic re-used water bottle which had us laughing at ourselves and pleasantly surprised as it was actually pretty nice. 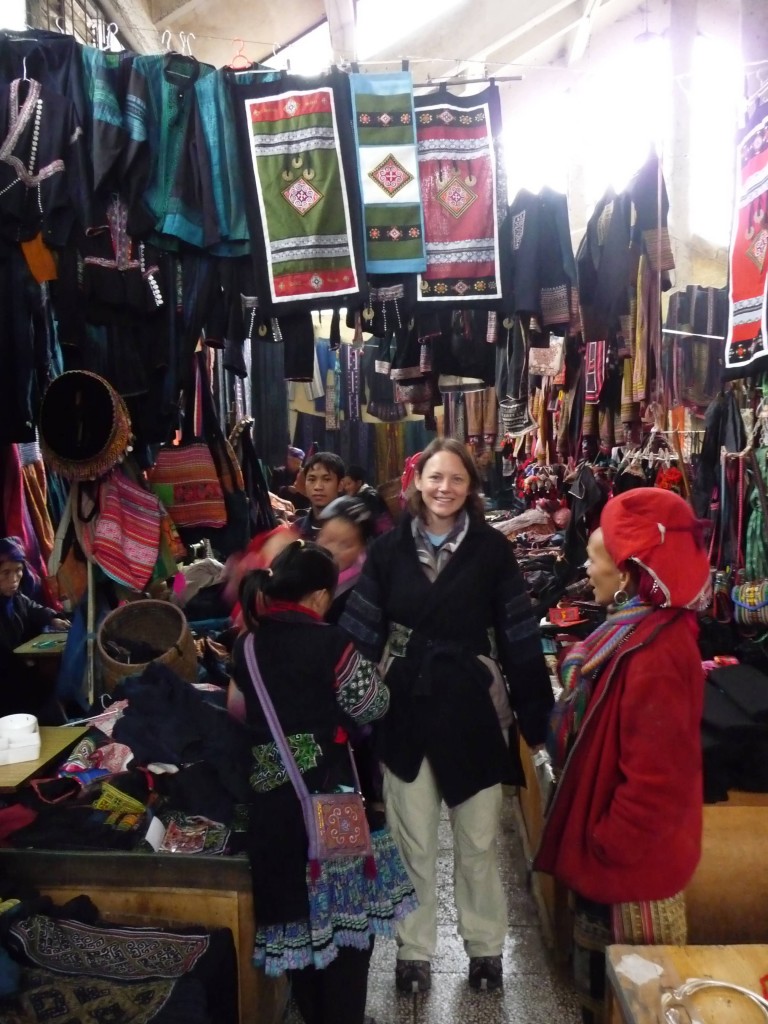 We were both very pleased and surprised at the warm hospitality of the people and sadly disappointed at the harshness of others.  We knew Viet Nam is meant to be the land of scams but could not comprehend before coming here how much this affects your time in the country.  It has hit home pretty hard how very very different this country is to any other we have visted in Asia.  We have not been able to leave our hotel without being harrassed and it’s very sad to think that the huge presence of these scamsters tarnish the enjoyment of a place so much – especially when the majority of the people we have met are warm and kind – it’s just so hard to really appreciate this when the others are so hard core. 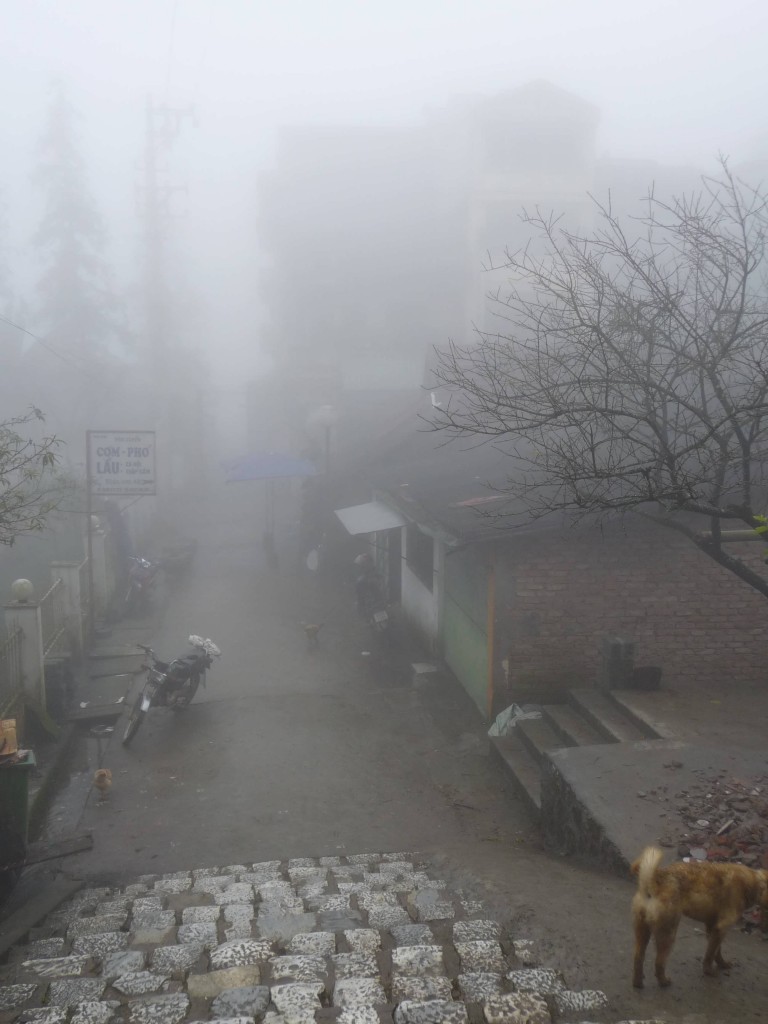 Sa Pa really is very beautiful, and we would both like to come back here in summer when we can fully appreciate the natural beauty of the area.  This time, we decided to leave Sa Pa much earlier than planned and try to find somewhere more to our liking.  We arranged for a van to pick us up at our hotel at 7.30am to catch the day train back to Ha Noi and when it still hadn’t arrived at 8am we were told by our hotel that it was most likely that they would have just taken our money and would not turn up.  Several phone calls later another van arrived, packed with furniture and many Vietnamese, and we proceeded to be driven at ludicrous speeds through the clouds, down the winding roads edged with sheer-drop cliff-edges that we were both thankful to have arrived at the train station alive (seriously!).  We were then pushed and shoved in the line at the station, finally made it onto the train with maybe 1 minute to spare, and then stared at the whole 11 hour journey by the Vietnamese we were sharing the carriage with.  We were harassed by people putting their feet on us (think, crusty yellow toenails, skin blackened with filth, toes digging into arms…) playing with Karen’s hair (I’m not even blonde, people!) and laughing at us for not liking this.  There were also kind people who would offer to share their food with us and try to look after us.  A reminder of the vast contrasts once again.  On arrival back in Ha Noi we waited for 15 minutes outside the train station to get one of the two recommended taxi companies that wouldn’t scam us.  Finally when one did arrive, we agreed on a price of 40,000 Dong with him, and showed him on the map the route of the 5 minute journey back to the safe haven of our Ha Noi hotel (a well researched place that is one of the few that looks after tourists instead of scamming them!).  25 minutes later, after much conversation where we would ask him why he was not taking us where we wanted and he would yell back at us in Vietnamese, we arrived at the hotel and quickly took all of our luggage inside the lobby so that the taxi guy would have to come in if he wanted to be  paid.  Of course he wanted 70,000 Dong because the journey had taken much longer than we said it would.  Funny how that happens if you drive around the entire lake and then do circles around the old quarter before stopping at the hotel.  After a heated debate between our hotel reception staff and the taxi driver, where they told him they were friends with his manager and they would report him if he really tried to charge us 70,000, the taxi driver left disgruntled and they explained to us that basically, even though we had used one of the only 2 companies in Ha Noi that would operate without scamming tourists, we hadn’t phoned the taxi company to make a booking, so the driver was at his discretion to do whatever he wanted.  Apparently it is completely acceptable for the drivers to still operate their own personal scams when the booking isn’t made through their head office.  The whole day left us wondering what on earth we are doing in this country????  We consoled ourselves by remembering we are lucky to be here, after all we are the only people we have met that haven’t had some of their stuff stolen in Ha Noi.  Lucky us.  We have been assured by other travellers at our hotel that it gets better in the south, so we’re gonna give this country a chance.  We really want to love it here.  We really do.  We have booked a Halong Bay cruise through our hotel (the only way to be sure that what you are actually booking is real!) because we know the scenery there will be amazing, and we hope to find some peace on Cat Ba island and be able to stay there for a while.  We’ll see. 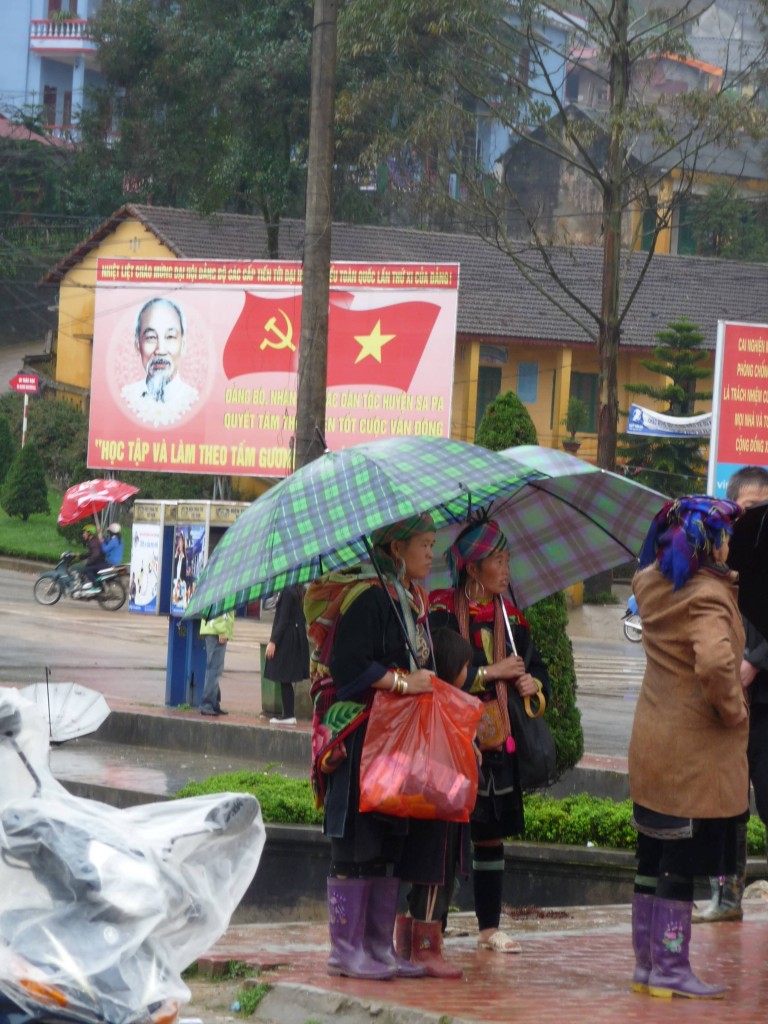 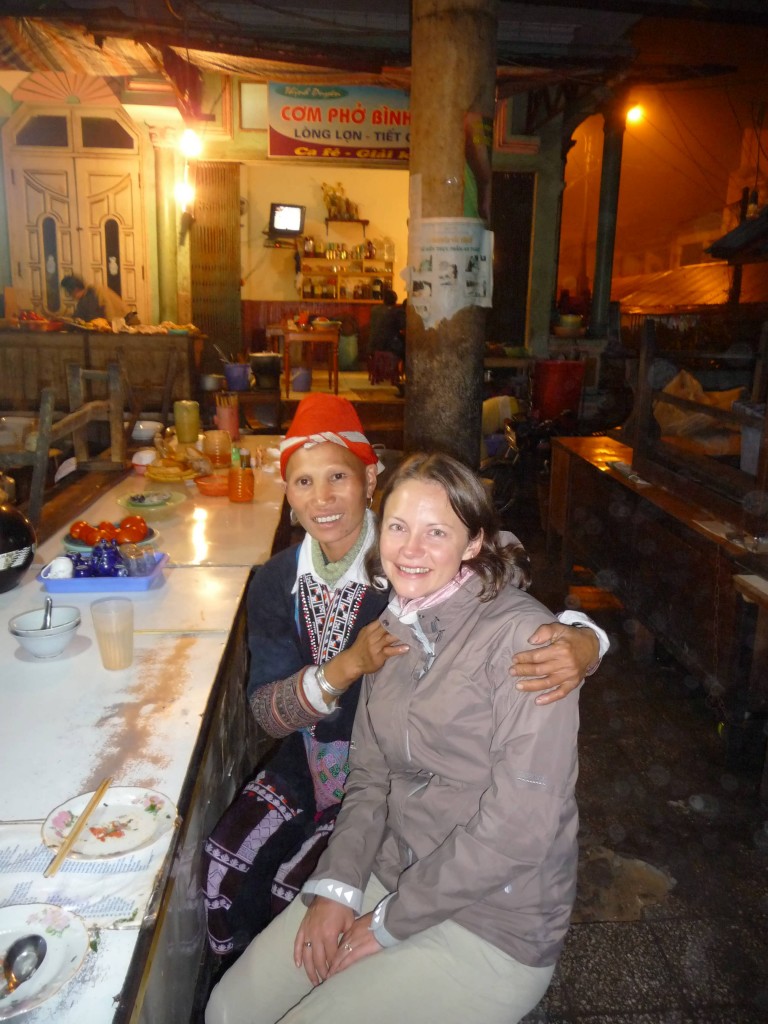 Although we have talked a lot about the intenseness of this place, Sa Pa was truly beautiful and we imagine Halong bay will be too.  We have had many good times here so far and it’s hard to comprehend how we have met some of the best and worst people of the trip here.  It is such a shame that the baddies have such a strong presence here and it makes the good people seem far fewer.  We can only hope that the beauty of this country will shine through for the rest of our journey here.  Our photos are here. 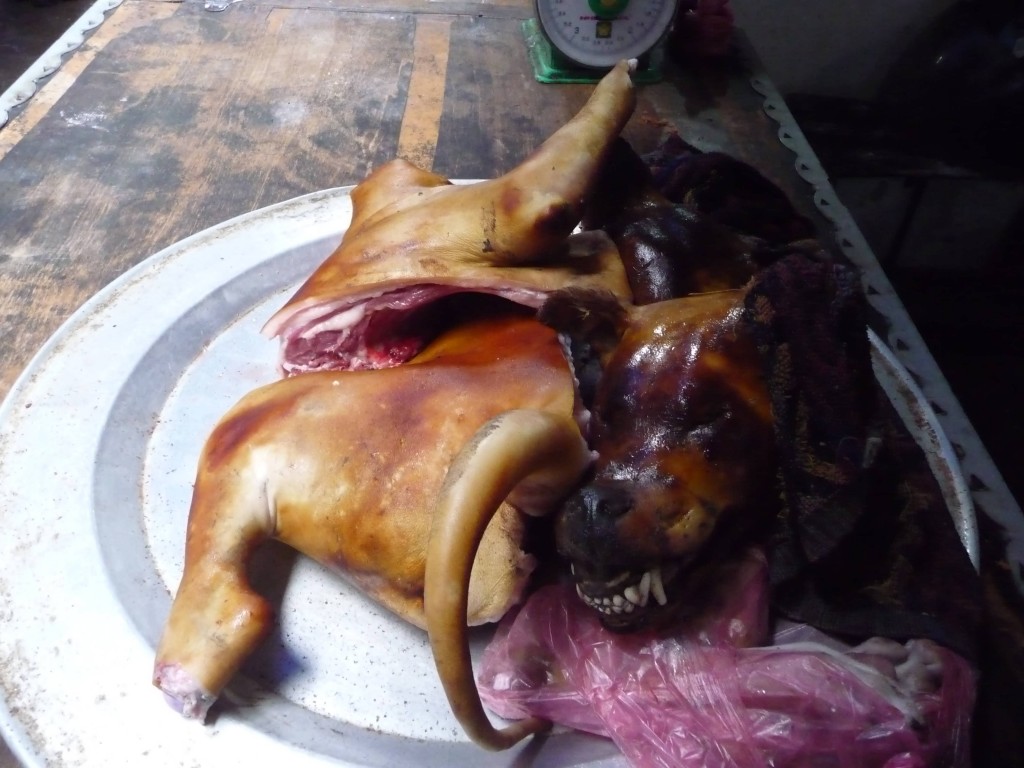